I know fans always want to look at the Spring Drills and then the Spring Game and, say that it is only the spring and these things don’t matter, especially if things go sideways.  But I’m not sure that is exactly true.

So I decided to look at the box score stats of the last three Spring Games and see what sort of comparisons there were between them… and if there was any correlation between what we saw in the spring then again in the regular season.

Now – admittedly these are broad comparisons but I think there might be a little something peeking through here.

For the most part the 2016 and 2017 seasons, and to some extent now, are good periods to look at what we had as a team in the spring.  In 2016 we had a record-setting offense with a nice 8-5 record at the end of it to show some real football success over that year.

So let’s look at the Spring Games comparisons in the major offensive categories from 2016 through today’s 2018’s games.

I have been writing since last season ended that we are going to have some major troubles on offense even with Kenny Pickett becoming a full-time starting QB because we are patch-working and cobbling together an Offensive Line that will not be as talented as our mediocre at best one last season.

Yes, it is spring and things do change over the summer then into the fall camps, but looking back over the last two seasons  and what we saw play out from the spring to the actual season I do wonder if today’s putrid effort by the combined offensive lines isn’t a harbinger of things to come.

Here are the last three Spring Game box scores. This one is today’s…

Now let’s look at what we did this time last year prior to our losing 5-7 season: 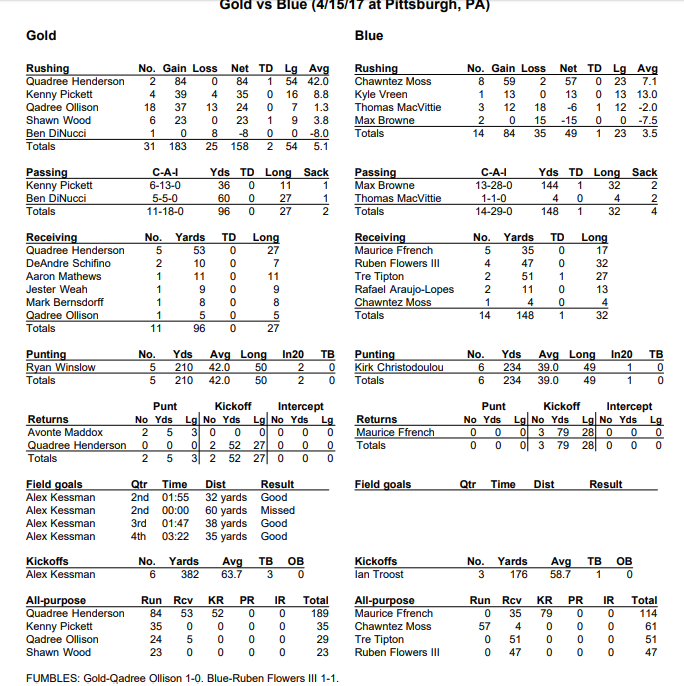 And because it costs nothing to post stuff on here let’s look at our Spring Game stats before our 8-5 2016 season:

Here is a review of the scrimmage by MajorMajors

I always get fired up for the Pitt Panther spring football game – until about 10 minutes into the game when I remember how boring they normally are. This year was no exception for me, but it’s still fun to get a glimpse of our Panthers.

Here are some disappointments and some positives that I took away.

— The Oline. This was obvious to any observer. Our Olinemen look big, but not exactly fit, IMHO. They might be too big. Too big to move well. Once the game started, this became the reality. The defense was in the backfield all day long.

The young offensive tackles were beaten badly by the defensive ends. Houy, Warren, etc., they are young and inexperienced, and they looked it. Our new offensive line coach may be having nightmares for a while.

First thing I would do is have each offensive lineman lose 10 to 20 pounds. Think lean-and- mean versus large-and- slow.

— Charles Reeves. The guy sure looks impressive. Big butt and thighs – like if he gets rolling, who’s going to tackle this guy. But I just didn’t see much aggressiveness out of him. Made a couple of blocks and missed one that I saw. But when he went out for a pass, he looked kind of slow and just ran parallel to the line of scrimmage the couple of times I watched him. I had been hoping for much more. He is young, but I’m guessing he needs significantly more time before he’s going to contribute in any significance way.

— Wide receivers, in general. We need someone to step up and I have been hoping that guy would be Michael Smith. My take after today was that he may be good eventually, but not yet. Since I have high hopes for him I sought him out during warm-ups. When I watched him run down for his first pass, the ball clanged off his hands. Not the impression I was looking for. During the game he did catch one long, underthrown pass. But I watched him on a couple of plays and he just didn’t seem to have the “quicks” I was hoping for. Like Reeves, Smith seems to be a ways off from being a contributor, IMHO.

Maurice Ffrench didn’t have a very good game either. Caught some balls and made a couple of runs, but he dropped one pass that was right on the money and he muffed a punt. He’s another player I have high hopes for – hope he just had a bad day, because we’ve seen him make some plays.

It should be noted that we did have several wide receivers sitting out – like Ra Ra Lopes, Aaron Mathews, Tre Tipton and Dontavius Butler-Jenkins.

Running backs. My disappointment continues to be that they just aren’t elusive. In their “defense,” they had no room to run in the spring game.

Punter. Based on this game, our new punter is going to make us really miss our old punter. He was inconsistent. He hit a couple decent ones, but most had little hang time and not great distance. Lots of work to do over the summer.

Well, the above is kind of depressing for Pitt fans, but there were some positives, IMHO.

— Kenny Pickett has a lot of mustard on his passes. The ball gets there in a hurry. So much so that on the first few passes of the game, he hit guys in the hands and the ball went right through their hands. Maybe Kenny had some adrenalin pumping.

And you could tell that Kenny was itching to run on some of the plays that were ruled as sacks, and it looked like he may well have eluded the rush on a couple of them.

— Q. Wirginis looks like a player. He played with great energy and was moving really well. Was in the backfield making plays, just like you want to see from your middle linebacker.

— The speed and aggressiveness of the defense. They were cranked up and brought big-time pressure on almost every play. The stats for the offense are poor because there was no room to run and there was no time to pass.

Michaelangelo Monteleone Michaelangelo holds a degree in Travel Writing from the University of Pittsburgh. He was a former staff writer for InPittsburgh Newsweekly, and currently resides near Atlanta, Georgia. He has been a Pitt fan since 1997 after he witnessed Pitt upset #22 Miami on Thursday night at Pitt Stadium.
Published April 15, 2018