Here are some POV’ers photos and post-scrimmage quotes and interviews.  One category I forgot to  add to that table yesterday were 3rd down conversions where on Saturday we went 2 for 20 attempts.

Pitt just got a walk-on QB for the 2018 recruiting class.  Non-ranked 6’5″ & 233 QB Jake Cortes from Peters Township.  People are keeping their fingers crossed that Nick Patti can play well enough if needed in a back-up job this season.

TE Chris Clark is officially off the Pitt roster…Gee, never saw that coming did we??

I want to say something about Chris Clark and the coaching staff.  Last spring I watched Clark in drills before a spring practice then had a chance to have a short conversation with him afterward – I wrote that I thought he was too thin for a TE and that it looked like he couldn’t block all that well.

Soon after that Pat Narduzzi came out the next day and specifically stated in an interview that Clark was one of the better blockers on the offense front line… something that wasn’t really true and was proven not to be during the season.

I mention this not to call out Narduzzi – I knew exactly why he said what he did as a confidence builder, but to point out that when you hear effusive praise for any singled out players during spring drills (and sometimes in the fall camp) I advise you to take it with a huge grain of salt.

But this article last year from Batko of the P-G lays out exactly what went on with Clark before he got here and what happened since he arrived and is an indication of what type of person Clark was.  That why it was completely unsurprising when he took off.  The are warning flags waving when kids bounce around like that before they get to Pitt.

“Beautiful day of weather, that’s for sure. Not much offense but great defense. We came out really healthy. That is probably the most important thing. There was 2:35 on the scoreboard today, and I said, ‘just give us two and a half more minutes of health.’ We’ll go into summer conditioning as healthy as we have ever been. I know you guys didn’t see a whole lot of things together, but it is easier to play on defense in a scrimmage like that than it is to protect. Our depth is not as good on the O-line when it is scattered out like that and have one good player. I don’t think [Alex]Bookser played even the last quarter and a half. I took George [Aston] out as well just as precaution to make sure we were healthy. I don’t know if you remember, but Brian O’Neill hurt his shoulder in the fourth quarter last year. I wasn’t going to let that happen this year.”

On if consistency stood out with Connor Dintino this spring:

“Yeah, just talking to Coach [Dave] Borbely and the consistency he has put together. Coach Borbely really just got him to the next level. He was the guy that could get us out of the game a year ago. He can start at center, left or right guard, he is that smart and is fundamentally really good, and he has built himself that way.”

On if overtime was a possibility:

On if he was happy to avoid overtime to keep the team healthy:

“You like to compete and it would of have been fun to get into another situation. Situations are good for our kids. Kenny [Pickett] ends that scrimmage the opposite of what he did against Miami, being the hero. All of a sudden now, you are out there 55 plays in really moving the offense pretty well in the first quarter. He had some drops. On the other side, we had some late DQs out of Tre Tipton. Some kids were sacred that he wasn’t going to play, and Rafael Araujo-Lopes we thought would play and it was precautionary to get him out of there as well to make sure he was healthy. Ricky [Town] didn’t have much to throw at today either.”

On Pickett’s interception at the end was a bad thing:

“It is not a bad thing at all, sometimes it is good. Kenny ended so well and you have to learn to deal with that adversity. I think it will be great for him. I know how he will take that and it will motivate him in the summer; it will not happen again. He tried to make a play and push it in there and sometimes bad things can happen in a 3-3 ballgame.”

On if he thinks this is the best defense he’s had at Pitt through the spring:
“I do a little bit, but I am cautious saying anything because you will find out in September. That is when you really find out how good they are; you don’t win a championship in the middle of April. I think we have depth. Are we a championship caliber defense yet? I am not sure yet, we will find out, but I think we can be pretty good and I know that we will be deep. At every position, we are two deep back there and can line up with the twos and make things happen. Are we great? I don’t know. We will find out.”

On the goals for this spring:

“The number one goal was to be more knowledgeable about what we could do offensively and defensively. Defensively we got a ton of defense in, and offensively we got a lot in. To be better football players, be smarter, and understand the concepts of what were doing offensively and defensively, that was one of the goals. The other goal was just building team chemistry and playing together, working together as a team. I think if you watch the way we practice, the way we interact with each other that we got that goal as well.” 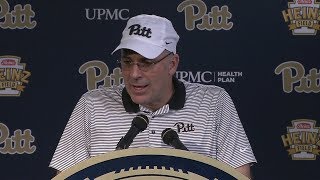 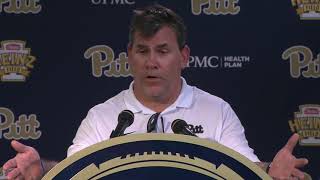 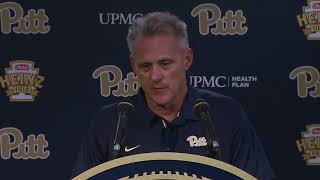 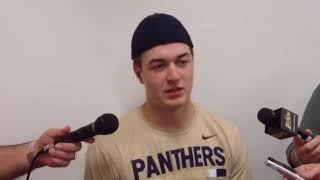 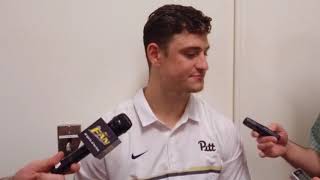 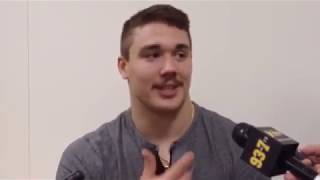 Michaelangelo Monteleone Michaelangelo holds a degree in Travel Writing from the University of Pittsburgh. He was a former staff writer for InPittsburgh Newsweekly, and currently resides near Atlanta, Georgia. He has been a Pitt fan since 1997 after he witnessed Pitt upset #22 Miami on Thursday night at Pitt Stadium.
Published April 16, 2018April 16, 2018