Well well well, if it isn’t the eve of another ACC Coastal road game.  Pitt visits Georgia Tech on Saturday for a 4 p.m. kick, and I’m excited about that because I live about 40 minutes away from “The Flats” as they call it in Atlanta, and I’ll actually be able to watch the Panthers in person.

What I’m not excited about is Pitt’s tendency to play down to their competition.  And lets make no mistake, Pitt is better than Georgia Tech.  Pitt has more talent on defense.  Pitt has more talent on offense (Hard to believe but yes it is true).  Pitt’s developing offensive line should be able to get some push in the running game.  Pitt’s defensive style is geared towards stopping the run – which is pretty much the only thing Tech has done well this year.

Basically all Pitt has to do is tackle the running back, pressure the quarterback, and cover the deep passing routes (all of which they can do well), and they could very well pitch a shutout.

Pitt plays Georgia Tech on Saturday, and while Tech sports a 2-5 record (good for last in the Coastal division), they are plenty capable of giving Pitt a good tousle, and even knocking Pitt off if things break their way.

After all, The Jackets beat Miami on the road, just a week before Pitt lost to the Hurricanes at home.

Still, Tech is transitioning from a triple option offense to…something more modern.  Everyone knows that this is going to be a multi-year project.  Tech fans are invested in it, and in their coach.  Geoff Collins is a hard nosed guy with Georgia roots and a (short) track record of success.  Although to be fair, Collins took over a Temple program that had won 10 games back to back and went 7-6 and 8-4, but…he’s got a bowl win on his resume and that’s more than we can say for Pat Narduzzi.

The interesting thing about Collins is that it seems like the guy can recruit.  He’s currently got the 22nd ranked class on Rivals for 2020.  A lot of that is due to the fact that he’s already collected 22 verbals.  There are only two four stars in that bunch, but the rest are all from Florida and Georgia so if his talent evaluation and player development are on point, Tech could be competitive (at least in the Coastal) in the next few years. END_OF_DOCUMENT_TOKEN_TO_BE_REPLACED

From the WSJ article:

The NCAA’s governing board directed its three competition divisions to immediately consider changing the rules governing such benefits for athletes, and to make all such changes no later than January 2021. “We must embrace change,” said Michael Drake, chair of the board and president of Ohio State University.

I’ll start this one with a disclaimer.  Kenny, if you a reading this, stop now.  You’re the best we’ve got and we are going to need you to carry us to eight wins this season. You’re resilient as hell and as tough as they come.  We may be critical of you at times, but we’re grateful for the wins you’ve provided and the wins you’ll provide, and we want to say thanks for grinding every day and leaving it all out there on the field.  We know you had a bad game last week, and we fully expect that you’ll bounce back against the Yellow Jackets. Hail to Pitt.

Now, for the fans and POV’erts out there, lets get down to an honest-to-goodness quarterback discussion.

As we’ve established in the post-Miami discourse, Kenny did not play very well on Saturday.  In fact, he had his worst game of the season.

END_OF_DOCUMENT_TOKEN_TO_BE_REPLACED 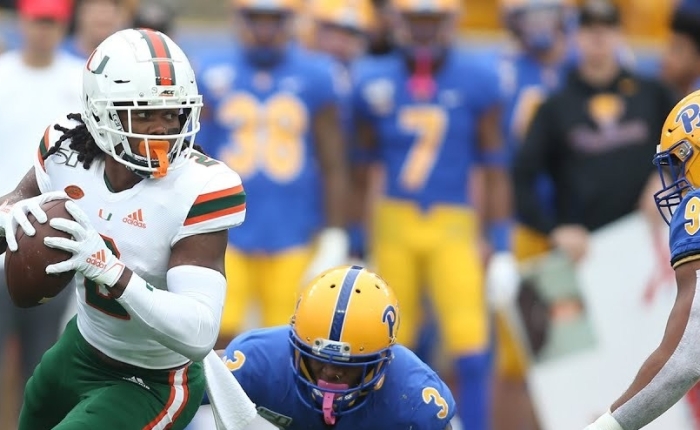 It was all there for us, like a glittering jewel waiting to be plucked off of a satin pillow.  National exposure.  A top twenty five ranking.  Sole possession of first place in the Coastal Division.  A chance to control our own destiny.  The opportunity to silence the critics, and to validate all those who chose to believe.

The jewel was not plucked.  Heaved in desperation towards the opposing team would perhaps be a more accurate description.

I don’t have much else to say about the game.  We’ve all rehashed the storylines at least dozen times by now.  Kenny Pickett regressed to his early-season form (more on that in this week’s QB corner).  The pass-catchers played their worst game of the season.  The running game couldn’t deliver when it needed to deliver most.

I suppose we should have seen this coming. END_OF_DOCUMENT_TOKEN_TO_BE_REPLACED

This year’s homecoming has everything you want.  A big game against an opponent with a national profile.  A chance to beat them and land in the top 25.

It also has a bad-ass Pitt RV courtesy of Tom Bailey.  This weekend marks Tom’s 50th homecoming, and that folks is a big deal.

Tom enrolled in PITT as a Freshman from Elizabeth-Forward High School in 1969, Fifty (50!)years ago.  He was a member of Pi Kappa Alpha, the ‘PIKAS’ and was the President of the Student Government Board.

As an avid PITT fan, Tom is known as “The Partying Panther”.  You’ve probably seen his custom-wrapped RV around Oakland, at Heinze and at many of Pitt’s away games because he’s driven it from Syracuse to Miami, from Boston & New York City to Texas and Arizona.

Tom’s motto listed on the RV is “Never Let A Bad Game Ruin A Good Party”, and that’s a motto that resonates well with us here at the POV!

Now all we need is for the Panthers to deliver Tom and the rest us fans a win against the hated ‘Canes.  LETS GO PITT!

END_OF_DOCUMENT_TOKEN_TO_BE_REPLACED

I was listening to Chris Peak’s podcast the other day, and I thought he made an interesting point. Basically he said that when we Pitt does something good (say … a four game winning streak for example) Pitt fans always get a paranoid. I think the exact quote he used was “they live perpetually in fear of the other shoe dropping”.

Well he’s right. But he’s right because the other shoe alway does drop. Or at least it has since 2009. Pitt has played very .500 football over the last ten years, which means that the shoe has dropped pretty darn consistently. END_OF_DOCUMENT_TOKEN_TO_BE_REPLACED