Here is an excellent Excel spreadsheet with all of Pitt’s class of 2018 scholarship offers on it. This great bit of work was done by a frequent poster on Rivals.com named Pugs35 and he graciously provides the link as an open source.

Look at the total numbers of offers we had out – 264 and at this point we have signed 16 recruits with one player, QB transfer Ricky Town, not listed an a recruit so that brings us up to 17 total commits which is where we now stand.

However as I commented in the last article keep an eye on WR Mychale Salahuddin who is a 4* recruit out of DC.  He took four official visits and we were the last of them just a week ago so that’s a good sign.  It would be nice to land at least one 4*.

Another interesting thing about this spreadsheet is the info column to the right of the “commit Dates” that shows a recruit flipping to another school of just decommitting for his original verbal.  i didn’t realize it’s so prevalent now.

I can’t embed the whole document but the link above takes you to a copy of it… here is a snapshot so you know what it entails:

Here is that link in its html form in case you need it.

Two days ago we posted up the verrrrry early look at a possible two-deep for Pitt’s 2018 season.  We concentrated talking about the offense in that article.  today let’s look at the defense.

Here are the graphics I included in that last article:

And here is the prospective ’18 two-deep:

At one DE position we see returners 4* transfer Dewayne Hendrix, who transferred in from Tennessee, and 2* kid Rashad Weaver.  Weaver is, to me, the better of the two players. Hendrix hasn’t shown us much at all while after his rsFR year in 2016 Weaver came on strong in starting five games.

Over the season Weaver was very productive for a kid who spot-played until the last quarter of the season: 28 tackles, 6 tackles for loss (TFL) and 3 sacks – then he had 3 pass breakups to boot.  Really pretty impressive for a first season of play.

END_OF_DOCUMENT_TOKEN_TO_BE_REPLACED 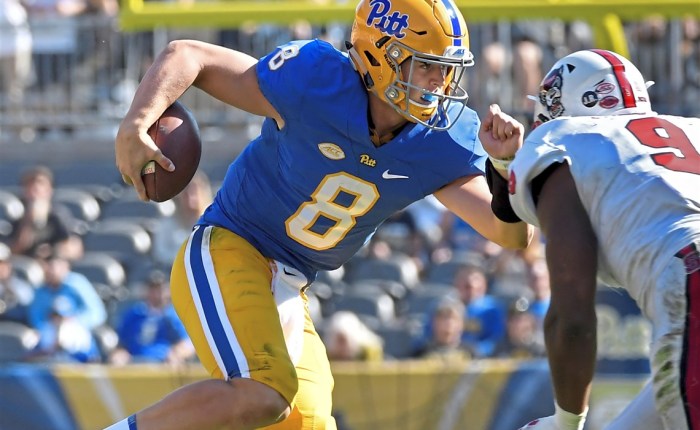 Let’s get back to some Pitt football talk.  All the issues surrounding the MSU scandal aren’t going away and we can talk that to death if left unchecked.  Pitt BB should be shot and put out of its misery.

First though I want to mention this – I deleted some posts today due to political content. I’ll do that a few times then let the poster(s) know I’ll ban them if it keeps happening… along with any racist posts that are encoded. This blog has an extremely low tolerance for that bullcrap.

So – 2018…  We have questions galore in this offseason and especially because we just came off an extremely disappointing 2017 season where we went 5-7 without a bowl bid. Let’s look at the talent on hand and see if it makes us feel any better about the possibilities of turning that record around to seven wins at least.

Here is the final two-deep found in the  Game Notes published prior to the Miami game.

Here is my verrrry early prediction of the 2018 two-deep. Note: I edited it because I was rushed and forgot about Aston, Wirginis and Ford.

The bare-bones table above is what I figure, at this very early date, what may be the two-deep coming out of fall camp.  Let’s not bet on this holding especially the lineman on both sides of the ball. It is always hard for any fans not actually at the practices to tell which OL are doing what.

And, truth be told, even when I attend the practices and watch the OL and DL go at it out there it just looks like a bunch of water buffaloes beating the crap out of each other.