It’s that time of year again; time to get our hopes up and something to discuss until the football doldrums are passed and we are into fall camp – when the reports and such coming out matter so much more.

First off Fran will be the Tailgating Wizard yet again in either Gold Lot 1 or 2 and will be flying the POV flag proudly.  Here is the plan direct from LastRow’s mouth:

“Tailgate info: I will be at either Gold 1 or Gold 2 at 10:00. Will have the POV flag and script Pitt flags flying…black Toyota Tacoma pick-up. I have beer, liquor and snacks…Joe L is grilling sausage and PittPT is bringing wine. Bring your own sunscreen! – Fran”

Here are the rosters for the Blue and Gold teams if you want to print them out:

I truly wish I could attend guys – just too many other commitments on this particular day. But the Spring Game is all about the fellowship of Pitt fans so get over there and enjoy not only other POV’ers generosity before and after the scrimmage but take that chance to get in a good look at the 2018 team personnel.

So what are we looking to see?

I’ll throw my thoughts in first.  Prime importance to me is how does QB Ricky Town look as far as composure goes?  We already know what Pickett is like under Center but for me the key to the ’18 season is how the QBs will respond under what I think will be heavy pressure on them all season.

Secondly I want to see if the defense actually knows what they are doing out there with Wirginis as the MLB.  Now, I am assuming that the MLB will be calling the defenses on-field and handling the defensive audible which are so important in today’s’ college game as the offense shifts prior to the snap.  This is a real concern of mine because that was the reason Wirginis, who always was head and shoulders above LB Matt Galambos physically, couldn’t break into the starting lineup.

Here are some other’s thoughts on what to look for this afternoon;

The P-G’s Brian Batko has “10 Players to Watch…” and covers my two and more.

Batko has another piece on how Pickett views himself when out on the field… it’s also a great background piece.

My guy Jerry DiPaola over at the Trib has a “Look For” piece also. Is he super negative because he leads of with this bit or is he just writing facts about something that actually happened with 2017’s team?

If you’re expecting Pitt’s Blue-Gold game to be an accurate barometer of what you can expect in the fall, you might be looking under the wrong rock. You might remember last year’s game:

• Chawntez Moss, who averaged 7.1 yards per carry, but was suspended during the season, played only six games and was dismissed.

• Or, those two sacks by defensive end Rori Blair.

Blair was dismissed before the season. MacVittie got buried on the depth chart. Both are gone.

He also says this which is an interesting turn of phrase:

Center Jimmy Morrissey is the anchor, and seniors Connor Dintino and Mike Herndon are putting down roots at guard. They are inexperienced, which could be problematic, but no one is panicking in public.

Alex Bookser is moving from guard to tackle and might bookend with graduate transfer Stefano Millin when he arrives from Kent State this summer.

Well, not in public but when that door closes Narduzzi, Watson and Borbely are  surely having serious discussions between themselves about the OL talent level…

As always injuries will limit some kids also…

Will we actually see something different on defense this season?  Well, maybe not during the spring game but they’ll take more risks this season (let’s hope that doesn’t mean more big plays from opposing offenses which is often the case when you gamble and miss.  But we need sacks, TFLs and turnovers badly so here goes…

Pitt’s players and coaches always have preached discipline on defense.

Stay in your gap. Don’t try to do the other guy’s job. Taking risks can compromise the structure of the defense.

But after last season when Pitt finished between 10th and 13th in the ACC in five important categories — interceptions, sacks, passing and total yards and tackles for a loss — new defensive coordinator Randy Bates and coach Pat Narduzzi decided a change was in order.

Taking an occasional risk in which every consequence is considered isn’t always a bad idea.

“It’s been a process because it’s a little different,” Bates said Thursday after the 14th practice of the spring. “But my mentality is if you go take a shot, you’ll make the play. And if you don’t, that’s what the other 10 guys are for.

“We don’t grade the guys on missed tackles. A lot of people do. We grade them on making plays and tackles for a loss and going and taking a shot.” 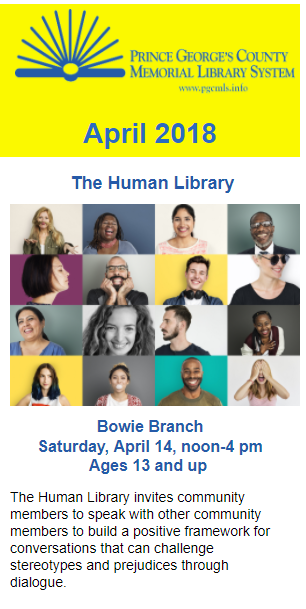 Speaking of which for all you Marylanders in our group I will again be a Human Library’s Human Book but today it will be in Prince George’s County.

Here is the advert…  If you remember this is where a bunch of people with unique aspects of their lives agree to be a “Human Book” to be checked out at 15 minute intervals so patrons can sit down and discuss issues and experiences which they themselves have no personal knowledge of or exposure to.

It is a fascinating afternoon and I urge you, if you have some of the day free, to bring your family down to partake in this – really teenagers and older though.  Today will be the third one I have been a “book” in and I absolutely value every minute I have done so far.

My issue is that I am a 100% P&T disabled veteran with a severe case of PTSD and other physical problems… and am definitely not the ‘face of’ what people think when they hear about someone with PTSD.

There are so many misconceptions about the illness and I try to help make it more understandable and less of a stigma to others diagnosed with it or living with someone diagnosed with it.  Obviously I openly share my experience with the illness with others and the give and take conversations, and learning experiences on both sides of the table, are amazing.

P/S: Send me photos of the tailgate please and if someone wants to do a write-up of what they saw during the scrimmage I’d really appreciate a first hand account of what struck you as good, bad, medium or sad…