Whose Players Were They Way Back Then?

After three years we have compiled a 21 & 17 record under Pat Narduzzi as the head coach at Pitt.  On the day he was hired I think we Pitt fans would say that if we were told that he’d have that record we’d have been a bit disappointed.

Our previous HC, Paul Chryst, was 19 & 19 in his three years at Pitt but when Narduzzi was hired the Pitt administration proclaimed that it was a new beginning! for the football program and that it would have much more support, mainly financially, from the new Chancellor Pat Gallagher and from the then new AD Scott Barnes.

Or so we were told. I have wondered if this was the case or not especially given the low salary we paid Narduzzi at the signing – $1.8M base contract which was 62nd among 129 FBS head coaches in 2016.

Regardless of the support, or the lack of it, Pat Narduzzi hit the ground running by ripping off two eight win seasons in a row by going 8-5 each year with one of those losses being the bowl game at the end of the season.  When you haven’t had a double-digit winning season since 2009 and for about 30 years before that eight wins looked pretty damned good.

Among those 16 wins was a great 2015 match against Penn State, at home, that we had after a 16 year hiatus of playing those rivals of ours. Perhaps topping that was an unexpected and wonderful upset of then #2 (and eventually the National Champions) Clemson down in Death Valley in 2016. Both were ‘signature wins’ and both very much appreciated by the fans.

Fast forward to this last season where things went south with seven losses stacked up against only five wins. Fans had a feeling we’d slip a bit from 2016 mainly because we lost both QB Nate Peterman who had one of the best years a Pitt QB ever had, along with the declaration by RB James Conner –  a heart and soul leader of the team.

But I don’t think many fans felt we’d limp along to only five wins. Prior to the season I predicted either seven wins or possibly six… “But no less than a .500 season” Well, I was wrong about that.

So why did that happen?  Why after two pretty decent years did we slip so badly that the only real bright spot was a win over #2 Miami in the last game of the year?

For as many Pitt fans there are, that is how many reasons you’ll hear about what happened in 2017. But for me one thing is the most pertinent question…

Let me counter that with a line from an old J. Giles Band song – “First I look at the purse.”  Meaning what are the resources (money in the song) the coaching staff has to work with.  You can be Vincent lombardi for all I care but if you don’t have the talent on hand to coach you won’t get anywhere.

The fact is that Pat Narduzzi inherited a lot of talent on both sides of the ball, especially on offense. Now while that can be debated ad nauseam a look at the team’s record bears that out – at least in part.  I scanned three “Two-Deep” lineups, one from each season.

For 2015 and 2016 I used the opening lineups but for 2017 I used the Miami lineup.  The reason I did that is because last season was one where the opening two-deep was substantially different from the one at the end of the year.

Here is the 2015 team and you can see I highlighted Paul Chryst’s recruits in pink. One note with this however – I consider a HS player to be ‘recruited by’ the head coach he commits to, not the HC at the time of the LOI day signing.  Both Hall and Whitehead committed to Chryst before his departure. 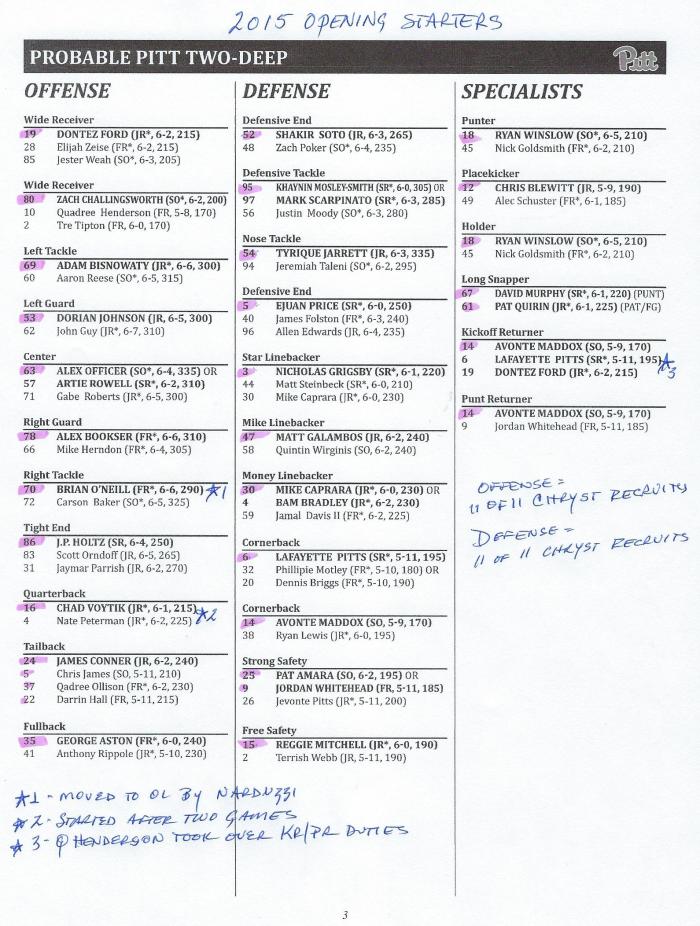 For the above you can see that, in essence, every starter on the two-deep was a Chryst recruit. That said, and I should have noted this – Whitehead and O’Neill had not played in those positions before the 2015 season so good for Narduzzi to switch O’Neill over from TE.

Also – Peterman didn’t start the season at QB but came in after two full games had been played so truthfully we should say that  9 of 11 starters on offense were inherited by Narduzzi.

On defense Whitehead took over from Pat Amara at the Safety position so 10 of 11 defensive starters were inherited by Narduzzi there.  On special teams Q. Henderson fleeted up at KR/PR also.

So basically I think you can say Narduzzi won eight games with inherited players.

How about 2016? Here is the two-deep for the opener of that season… 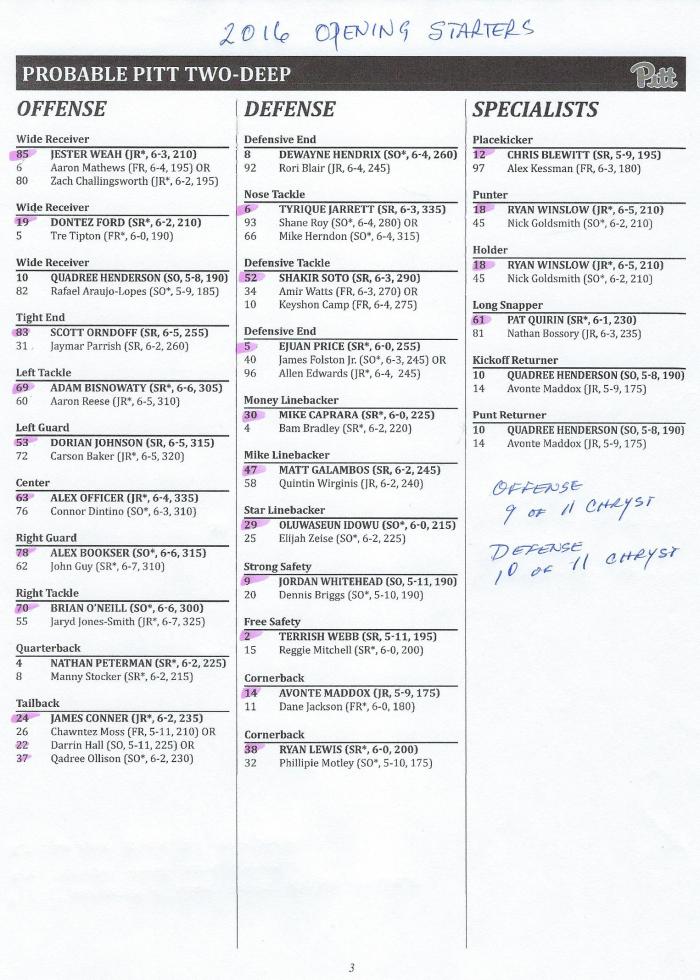 In all honesty things didn’t change a whole lot two years ago either – we have the transfer Dewayne Hendrix in at DE along with Q. Henderson being placed as a starter at WR but it remains much the same as the year before – 9 of 11 offensive starters were Chryst recruits and 10 of 11 of the defenders.

So what changed going into 2017? Well, the first things that come to mind are the things mentioned above – Peterman and Conner no longer being on offense and they took a ton of talent with them.

Here is the Miami game lineup of 2017 – again, I picked that point in time because 1) this starting lineup is much what we saw for the majority of the season and 2) because it gives us a good look at who we may see in the starting lineups for 2018. 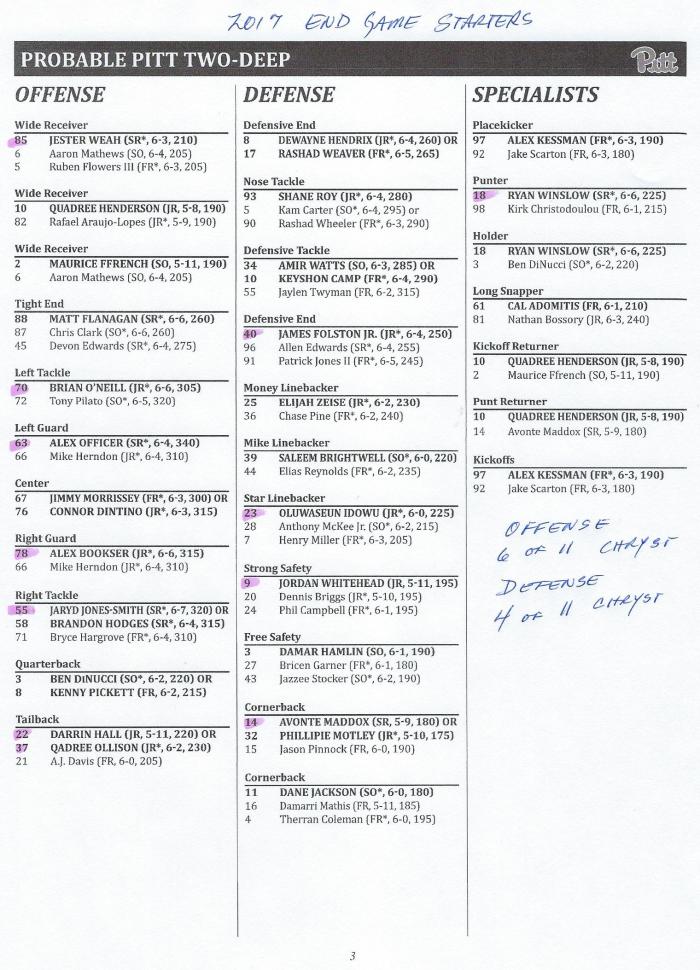 Now things started changing from the Old Guard to the New Guard as we see by the starters shifting over to (basically) more Narduzzi’s recruits than Chryst’s.

On offense we dropped like a rock in production from 2016 to ’17… however on defense we had our best year under Pat Narduzzi and that bodes well for the future. I do caution though that when I say ‘best under Narduzzi’ that is faint praise as his first two years’ defenses were truly horrid.  Last year’s was a bit better and here is the last two years comparison: 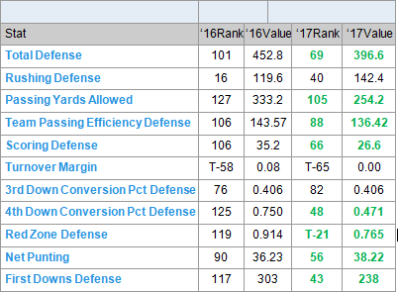 We saw this writ large when our defense played it’s best two games in three seasons at the end of this year’s schedule against Virginia Tech and then against Miami.  So that is something to pin our hopes on – that the trend will continue.

Personally I am not as optimistic as some are about the fact that Narduzzi is going to have more of his ‘own kids’ out on the field in 2018. I think that was a main reason that we tanked last year – that the kids he’s putting out there aren’t as good as the ones who are leaving each season.

It takes decent coaching to win eight games at Pitt – we all know that.  But nothing much changed in the coaching staff from 2016 to 2017 except at the offensive coordinator position. I don’t think the drop in offense can be solely attributed to Canada leaving – much more like the fact that we had no replacement for Nate Peterman , Scott Orndoff, James Conner, etc…

And aside from Kenny Pickett at QB and Aston coming back at FB I’m not excited about the new kids coming in on offense either so I see more of the same in 2018 as we had last season.  We’ll be better in spots, most probably on defense, but my opinion is that it was the mostly the “Jimmies and Joes” over the 2015 and ’16 season who won us those 16 games and less Narduzzi’s coaching.

Michaelangelo Monteleone Michaelangelo holds a degree in Travel Writing from the University of Pittsburgh. He was a former staff writer for InPittsburgh Newsweekly, and currently resides near Atlanta, Georgia. He has been a Pitt fan since 1997 after he witnessed Pitt upset #22 Miami on Thursday night at Pitt Stadium.
Published December 31, 2017December 31, 2017

305 thoughts on “Whose Players Were They Way Back Then?”