A Little Deeper Look Into Recruiting

Yesterday Pat Narduzzi was quoted in the media saying this about recruiting:

“I don’t know if our staff needs reinforcement with what we’re doing here. They know the plan,” said Narduzzi. “I guess it’s the fans that need reinforcement. We have a plan and we’re going to execute it. We know who we’re talking to, who we’re texting, we know who we need to work harder on, that’s recruiting. Pitt football is on the way up.

I think every college head coach says this, the thing is the coaches themselves don’t believe or do it.  Case in point using Pitt as an example:  Here are the Top 17 offers we have out to 2019 recruits. Note their star rankings and hometowns (and here is the rest of the long list): 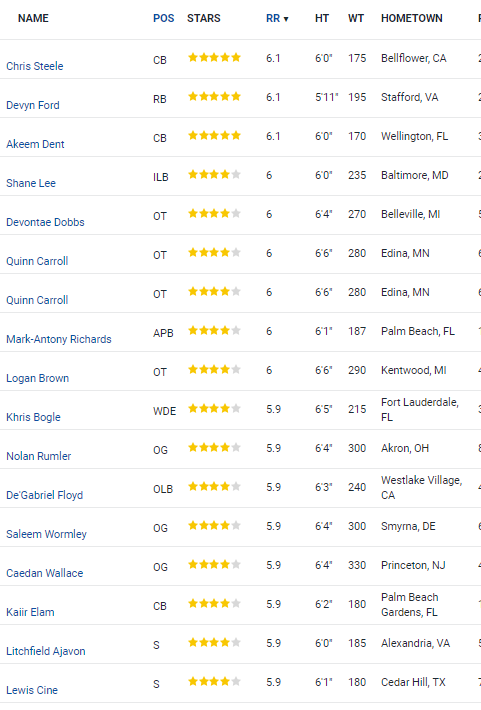 Ask yourself this: How did Pitt know to offer all those 5* and 4* Blue Chip players from far away places?  Pitt is doing, and has always done, just the same thing every college football program does and that is relying on the recruiting sites star ranking system for early on targeting.

Pitt does not have staff, scouts or recruiters scouring California, Minnesota, Michigan, Texas, Hawaii, etc. yet all those offers from Pitt to players from those places went out many months and sometimes over a year ago.

You can bet  money that at any time in the recruiting process if any of those 17 kids listed, and remember those are only 17 out of the 97  5* and 4* offers we have out, called Pitt (or any school like Pitt)  and said “Coach I’d like play football for you and want to commit to you right now.” Pat Narduzzi wouldn’t jump up and down while he was saying “Oh Hell Yes!” and then start turning on ‘The Lights’.

Do we really think that he, or again, any college coach not named Nick Saban, would tell those highly ranked kids who called – “Well, let’s take a step back because we’d like to have you come to a camp or take an official visit first before accepting your commitment”?

Not on your life.

I’d say that with the large majority of those 97  4* and 5* kids did that their name would be on Pitt’s official commitment list within an hour.  Positions needed of course, but even then many recruits get position-switched when they get to their school. The key is to lock the best kids in.

So again, how do the recruiting staffs know how good those far away kids are and why were they offering them so many months ago? Because they sure as anything look at recruiting star rankings when drafting up their first edition of their “Recruiting Big Board”.

Now all that said- when they get the uncommitted 3*, 2* and NR kids into the summer camps or on official visits like last weekend then perhaps those stars don’t matter to them but it is a whole different world with the highly ranked blue chip kids.

BTW – every HC says the same thing that our coach said the other day. I’m not really singling him out because I clearly remember Dave Wannstedt saying just about the exact same thing then when Feburary came around and they did the annual the fan’s LOI Day Signing Event he, or his staff coaches, very often mentioned that the kid was a four star or five star recruit.  The current staff has done so also.

It isn’t the end all and be to be sure, all but another example of college head coaches saying one thing then actually doing another. But tell you what – I’d love to hear Pat Narduzzi, or his position coaches, when up on the LOI Day stage this year say “…and here is another of our 4* kids for 2018…”  Fingers crossed.

Note: Here is an example of how early we jump on these blue chip kids to offer scholarships for the next year- this is a small sample of offers out for 2020: 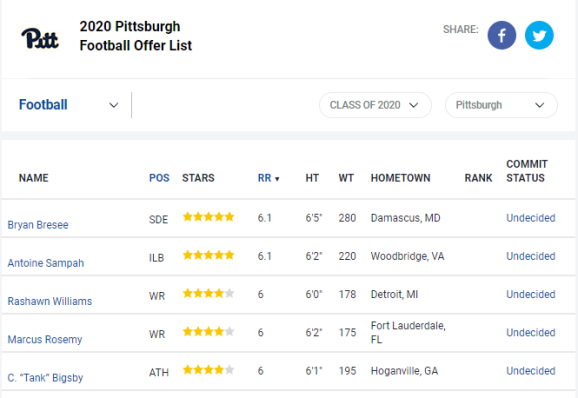 Michaelangelo Monteleone Michaelangelo holds a degree in Travel Writing from the University of Pittsburgh. He was a former staff writer for InPittsburgh Newsweekly, and currently resides near Atlanta, Georgia. He has been a Pitt fan since 1997 after he witnessed Pitt upset #22 Miami on Thursday night at Pitt Stadium.
Published June 19, 2018June 20, 2018

65 thoughts on “A Little Deeper Look Into Recruiting”