10 Reasons why Pitt will beat Virginia Tech on Saturday

END_OF_DOCUMENT_TOKEN_TO_BE_REPLACED 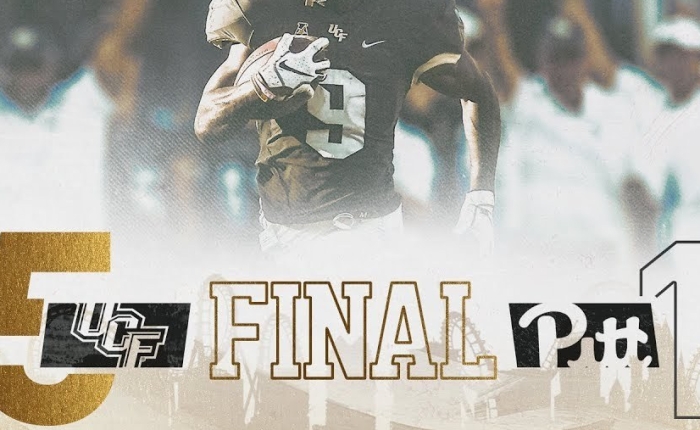 For the second week in a row, nobody is giving Pitt a chance.

The computers?  Nope.  ESPN gives UCF a 73% chance of winning.  Jeff Sagarin says the teams are a little more evenly matched, but he still predicts Pitt will lose by five.

Nonetheless, it looks like Pitt has earned a little bit of street cred.  This game will be nationally televised on ABC / ESPN 2 at 3:30.  You can bet that the networks are hoping for another near-upset, or maybe even an actual upset this time.

First, I would like to congratulate the #6 Pitt Women’s Volleyball team for defeating the #10 Oregon Ducks on Wednesday night in four sets.  That folks, is what athletic excellence should look like.  Enjoy these highlights and Hail to Pitt.

no shortage of highlights from last night's win over no. 10 oregon!

Tipton is one of 22 players nationwide named to this year’s team, which was selected from a pool of 137 nominees by an esteemed panel of judges, including ESPN’s Kirk Herbstreit and former Florida Gators and NFL quarterback Tim Tebow.

As a reward for being named to the team, Tipton will be invited to the 2020 Allstate Sugar Bowl to join Tebow and Allstate volunteers to give back to New Orleans through a special community service project. Allstate will recognize the team during the halftime show.

Not too shabby.  Tipton’s perseverance in the face of adversity has certainly paid off.

Most importantly,  you should vote for him to be named Captain by clicking this link.  You can vote once per day, so get out there and vote for this outstanding Pitt Man.  And do it more than once!

END_OF_DOCUMENT_TOKEN_TO_BE_REPLACED

I am starting out this post with a feel-good public service announcement. Pitt women’s volleyball is #10 in the country.  They are playing Ohio State tonight at PPG arena at 8 pm.  You could do a lot worse on a Friday night than to go out and support these talented young women.

…and now on to our regularly scheduled Football content.

Hard to believe that gameday is almost here.  You’ve got to love a short week.

There has been much weeping and gnashing of teeth over Pitt’s performance last week, and in typical Pitt fashion, much of it is probably overreaction.  Did Pitt’s offense play extremely poorly against the Hoos?  Yes, yes they did.  Is Kenny Pickett ever going to get it together and turn into a competent passer?  Well, we still aren’t sure.  With that being said, Chris Peak’s podcast offers some sage advice on the topic, and it also points out that we Pitt fans have been down this road before.  Many times…

I’d encourage you to give it a listen.

END_OF_DOCUMENT_TOKEN_TO_BE_REPLACED

Well fall camp is wrapping up, and next week the team starts their Virginia game prep in earnest.

The depth chart won’t be published until Monday, but I think we’ve watched enough videos and read enough camp reports to get an idea of who will be on the field.

The question is, will they be any good?  There is a momentum behind the program that has not been felt in many years, but good vibes can dissipate rapidly with a blown coverage, a missed tackle, a sack surrendered or an untimely interception thrown.

Pitt still doesn’t have enough talent, detractors will say.  Nothing we saw last year shows that we’ll improve, they will say again.

And it’s possible that they are right.  END_OF_DOCUMENT_TOKEN_TO_BE_REPLACED

Well, here we are.  It’s the eve the ACC championship game, against the mighty Clemson Tigers, right in their own backyard (or close enough too it).

You would have to be delusional to think we have a snowball’s chance to win this one, and Las Vegas agrees.

Pitt is  26.5 point underdogs according to at least one source, and Clemson outclasses us in every position (except fullback!)

But this is college football folks.  And while ESPN gives Clemson a 95.7% chance of victory, that leaves a 4.3% chance for us.

Of course it means that 30 young Pitt men will have to play an absolutely perfect game.

And Clemson would have to play their worst game of the season.

But stranger things have happened.

Or who could forget the time when lowly Stanford, coming off a 1-11 season took down #2 USC.  (This was also in 2007.  Stanford was 40 point dogs, and that game is commonly listed as the second biggest upset in the last 25 years.)

But these were not championship games.  They were September and October games, when anything can happen and teams are frequently overrated.

It is unlikely that Clemson is overrated.

Still, there may be some magic in the air on Saturday night.  Or maybe in the rain, if the weather forecast holds true.

So go ahead, predict a win you Pitt optimists.   Just know that by doing so you are probably locking in a jinx.

Personally I’d rather be proven right and pleasantly surprised, and most predictions are going to have Clemson scoring a lot of points in a revenge scenario.

In that light, I originally posed the prediction that realistic side of me believed to be right.  Then I read my post and was immediately depressed.  I am spending too much money and traveling too far to not be able to cling to a shred of hope, no matter how small.  Nobody is giving us a chance and there is nowhere to go but up, and if there  is one thing Pat can do on gameday it’s get the guys fired up for the big one.  Lets see if we can’t make some history on Saturday because our fan base certainly deserves it.

Hail to Pitt and I’ll see you in Charlotte.