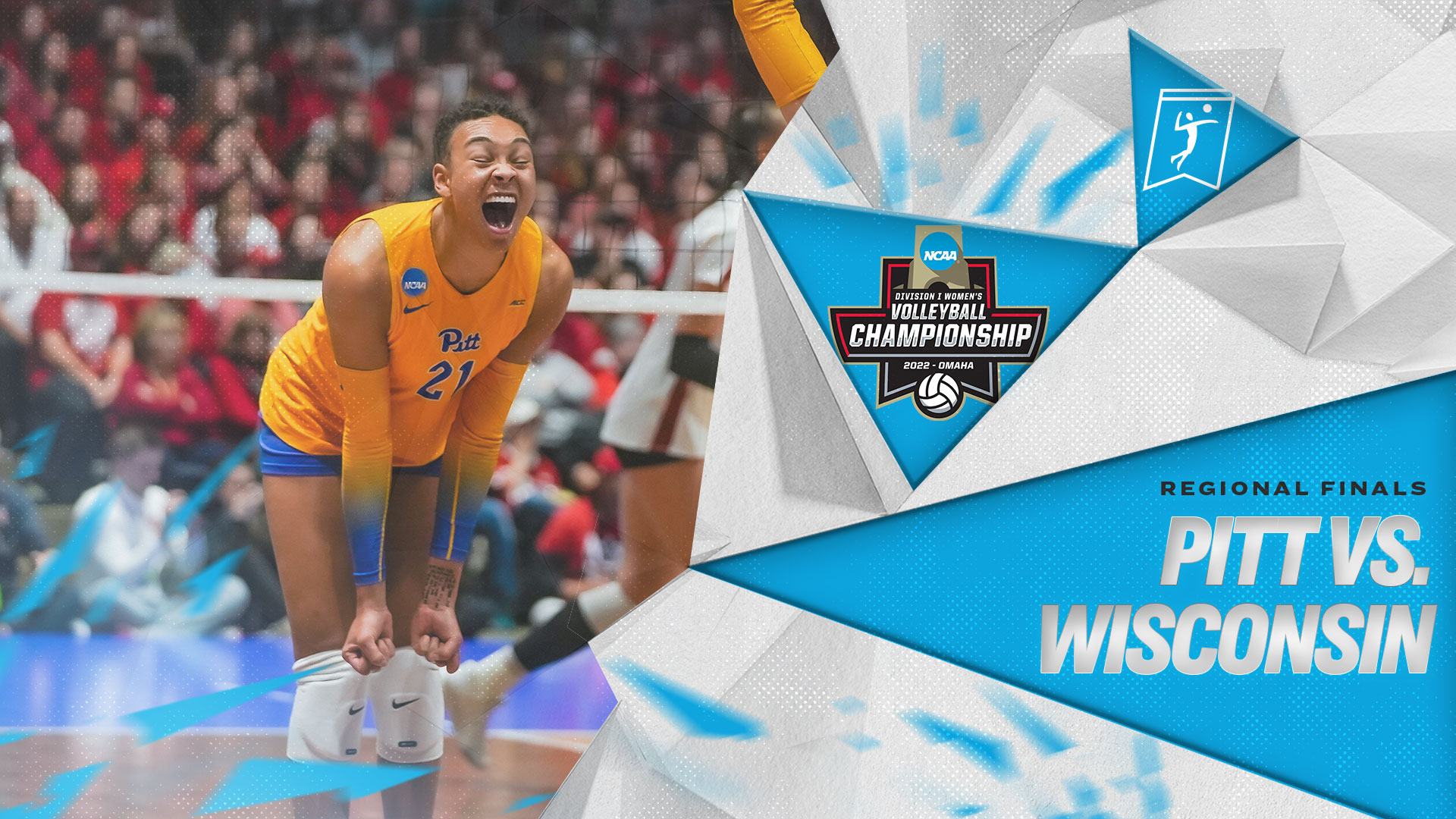 For the second year in a row Coach Dan Fisher has guided our Pitt Panthers women’s volleyball team to the Final Four.  We will play our ACC rival and co-champion Louisville on Thursday, December 15th, at around 9:30 PM or approximately 30 minutes after the first semifinal match between Texas and San Diego ends.  Before discussing the semifinal match a recap of Pitt’s last match is warranted.

If you watched the Pitt versus Wisconsin match on Saturday and did not become a volleyball fan, there is no hope for you.  You should just skip the rest of this article!  Even if I had been a neutral observer of the match, it would have been a great exhibition of volleyball.

(Editor’s Note: Here is the full five set match against Wisconsin in case you didn’t watch it live.  For shorter time’s sake here is the all-important Fifth Set to determine the winner of the match.)

Unfortunately, I was not neutral and it was just a tad stressful.  I knew we would win the match when the ball on match point passed mid court out of bounds and not until then.  That was when Pitt won, not when the ball hit the floor off Anna Smrek’s desperation attempt to save the ball.

You can see the University of Pittsburgh writeup of the match here.
Pitt Volleyball is Final Four Bound!! – Pitt Panthers #H2P (pittsburghpanthers.com)

There are so many things to say about the match I could bore you all to tears.  I will opt instead to be just cover the highlights.

In the match Pitt came out fast in the first set.  Pitt was ahead in the first set 8-3, 15-9, 17-10, 18-11, and even 19-13 before losing the set 23-25.  They were playing in front of 7,200 people with many of them rabid Wisconsin Badger fans yelling at the top of their lungs.  Our Panthers could have folded at that point and got swept.  They did not.  At the end of that first set Coach Fisher put in Julianna Dalton to see if she could be effective.  She was not.

Pitt started the second set slow, with Wisconsin taking a 0-3 lead.  Pitt scored the next point on a Courtney Buzzerio kill and started their comeback.  Pitt took the lead at 4-3 and never relinquished it.  They won the 2nd set 25-21.  Wisconsin fans thought “that was a fluke.  No need to worry yet.”

In set three the lead went back and forth between the teams.  Pitt took the lead at 18-17 and never allowed Wisconsin to tie the score for the rest of the set.  Pitt won the set 25-21.  Wisconsin fans were stunned.  This was not the way this match was supposed to play out.

In the fourth set Wisconsin responded to this nonsense.  They started hot right out of the gate with a 1-5 lead.  Pitt manages to close it to 8-9.  That would be the closest they got in the set, losing 19-25.  So on to the fifth set the match went with momentum on the side of the Badgers.

In the fifth set Wisconsin took the first point and then Pitt went on a 5-point run behind Cat Flood’s serve.  Pitt then opened the lead up to five at 7-2.  Wisconsin came back a bit but Pitt went up by five again at 11-6.  At this point Wisconsin went on a 6-point run to take the lead at 11-12.

It appeared our Panthers were collapsing right according the script everyone in the nation expected.  Pitt tied the score at 12.  Wisconsin took the next point for a 12-13 lead with the serve two points from victory.  The arena is rocking.  Pitt is out of timeouts and challenges.  Pitt won the next point on a Buzzerio kill.

Cam Ennis went back to serve.  Vazquez Gomez, who had been stuffed numerous times during the match, went up and creams the ball for a kill.  Ennis served again.  This time Pitt went to Buzzerio again for the kill and the match.  At this point in time on Saturday there was a loud noise heard in western South Carolina.

Pitt won this match on their serve game.  That and their pure will to keep the ball from hitting the floor.  They had a Pitt tournament record of 88 digs.  They managed to put three good sets together which all you need to do in a volleyball match.  As I mentioned in my last article, what happens in the other two sets does not matter at the end of the match.

For the match Wisconsin won in every major category:

The one stat that was in Pitt favor was their serving.  They had 8 serve aces to only 4 serve errors.  Pitt was serving very tough the entire match and only had four errors!  Cat Flood had 3 aces versus no errors.  Wisconsin had four aces versus nine errors.

Buzzerio again was our points leader.  She had 18 kills, 1 ace, and a block assist.  Wisconsin was making it a priority to stop her.  Their middles were cheating to her side all night long when she was on the front row.  She attacked from the left side once and their middle followed her to that side.  While Wisconsin was targeting Vazquez Gomez with their serves, she did a good job on the front line against much larger opponents across the net.  The same could be said for Cam Ennis, whose birthday was Saturday. She had her best match as a Panther as a six-rotation player with 9 kills, 6 digs, and 2 assists.  She was thrust into this role just when the tournament started.

(Editor’s Note: Part two of this coverage will discuss our coming opponent Louisville and what needs to be done to get the ladies into into the championship game. That will post tomorrow morning)

34 thoughts on “Pitt WVB to Final Four by Beating Wisconsin”