Out of Conference Scheduling: Just How do They do It?

Editor’s Note:  Richard Hefner (Pitt-Cocks Fan) has come through again.  While I thought I would have nothing but time on this quarantine, it has been the exact opposite.  I am busier than ever.  Perhaps it’s because my company (and my customer) is scrambling to figure out what the 19 $ impact will be.  (Let me tell you, it’s not going to be good).  Perhaps it’s because we are all still trying to figure out how to be efficient working from home.  Perhaps it’s just because I am really, really enjoying the extra time with my family (even if it’s just 20 mins for breakfast and 30 mins for lunch).  What I can say is that I haven’t consumed this much alcohol on a weekly basis since I was an undergrad, and that Richard’s articles are just what the doctor ordered, ’cause I sure as hell don’t have time to write any.  Hail to Pitt.

OOC Scheduling, How do P5 teams do It

I’ve been doing a spreadsheet on future P5 OOC scheduled games since 2018. I got the idea from the discussions that always occurs when Pitt schedules a new opponent or comparing W/L records.

If you have a daily college football reading list, I suggest you add it. If not, at least take a glance. Besides the reporting of schedule additions across all FBS / FCS teams, they also occasionally write short articles like this one that I found interesting:  https://fbschedules.com/the-19-highest-future-non-conference-football-game-guarantees/

A little off topic, but did you know there is a business that helps in the scheduling process?  I don’t know anything about how a team/conference does scheduling. Obviously, there seems to be some type of guidance from the conference, but there must be some feedback from the teams. Anyway, turns out there is actually a company that helps in finding & facilitating an opponent be it P5, G5 or FCS that also has an opening for a specific date.  (Editor’s Note:  I am both surprised and not surprised.  After all, what college AD has time to figure this out?.  At the same time, I always lived under the assumption that AD’s just put out a lot of feelers.  Makes total sense that there is a broker here.  Really good find Richard.  Here is a pretty damn interesting article by the NY post of all rags, that describes it.  And here is the actual website of the company – Gridiron Schedule.  I feel like this in and of itself is worthy of an article and comments section.  Have no idea if Pitt uses it, but damn it’s like a video game.  Also, take a look at how they position themselves.  First sentence in the “Tour Gridiron” page:  “If you are in the beginning stages of rebuilding a program, have undergone an increase in the number of conference games, or made a coaching change that brings a different scheduling philosophy to the table – any and all of these things can dictate the need to make changes to your future schedules.”  Crazy.  Would love to take a peek under the hood on these guys.)

Before I show some data, I went to say this is not a critique of Pitt scheduling. Of course, I will use Pitt data as needed but I am trying to put it in context of all P5 conference teams.

As you all know, FBS teams are limited to 12 regular season games. (Note: there is an exception for teams playing Hawai’i in Hawai’i. I am ignoring that exception).

In the ACC & SEC there are 8 conference games per team leaving 4 OOC slots to fill each season. The Big 10, Big 12 & Pac 12 play 9 conference games. This leaves only 3 OOC slots to fill.
The below table shows the total number of OOC games scheduled per conference for the time period 2021 – 2030 (10 seasons). It is broken down into games against P5, G5 & FCS opponents. (Note: I am including Notre Dame & BYU as P5 teams. Most sane people think of BYU as a G5 team but the ACC, SEC & Big 10 allow their conference teams to consider them as meeting the recommended guideline of at least one P5 OOC opponent per season.) 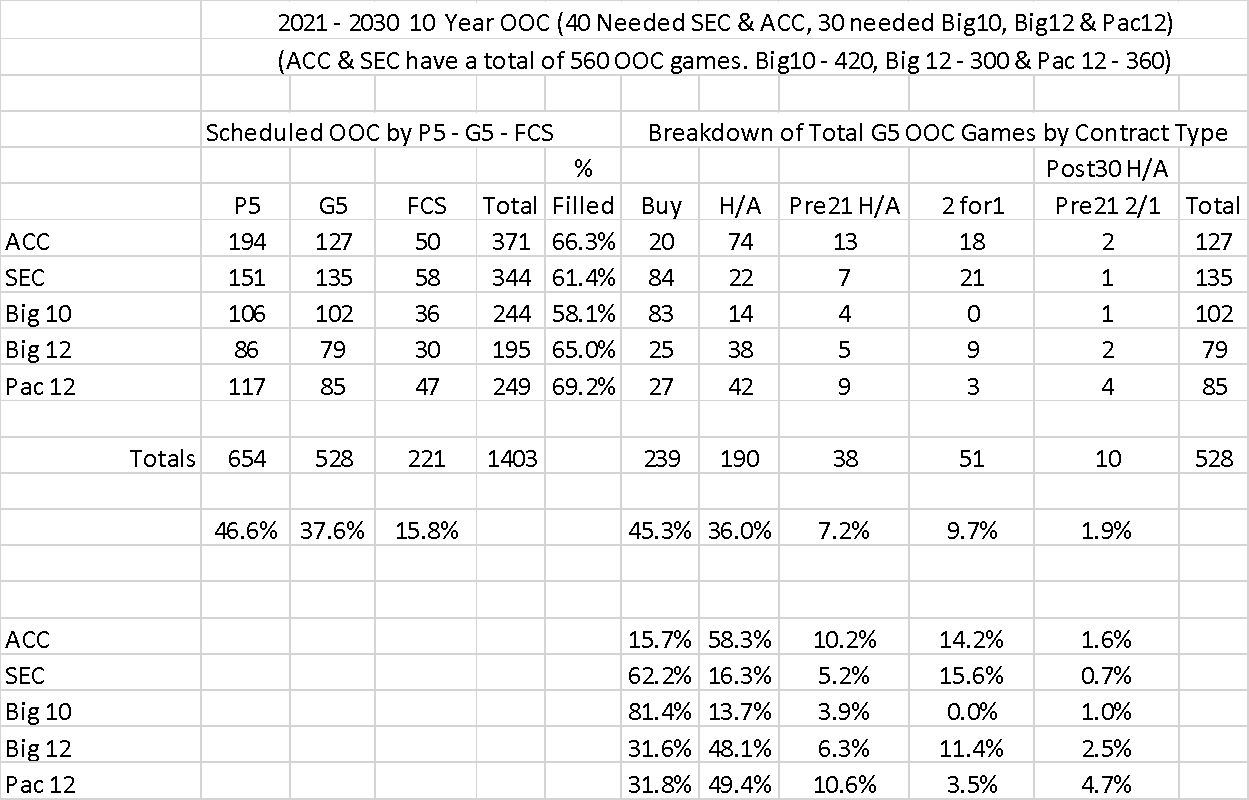 Now this is a lot of data to consider. The ACC / SEC needs to fill 140 OOC FCS slots in a 10-year span. You can see that FCS scheduling is not done on average more than 4 years in advance. There are exceptions of course, Virginia Tech already has all 40 games scheduled.
G5 buy games are prevalent in the cash rich SEC & Big 10. The 2’nd link I provided to FBSchedules tells why. Over $36,000,000 for 19 buy games. There is also the drive to have at least 7 home games each year.

Editor’s Note:  I’m just going to throw this out there, but are there a lot of “buy” games in the SEC and Big 10 becasue the conference is cash-rich, or are there a lot of buy game because these two conferences are perceived as the most powerful? Or are they cash rich because they are perceived as powerful?  Lot of rabbit holes to go down as we consume more and more brown liquor… Richard is exactly right about seven home games though.  Also, it’s really interesting how ACC / Big 12 and Pac 12 all have similar (low) numbers of “buy” games.

Let’s breakdown the above chart to individual teams. I am going to show the ACC & the Big 10 conferences. Who’s rich? Who’s poor? Guess who takes the guideline of at least one P5 opponent as Gospel? Who’s challenging their players? Who isn’t? Who likes to get it over with? Who is a laggard? Color coded is lowest % of OOC scheduled.  (MM’s Note:  Sorry this didn’t come through on the article I got)

If there are enough comments & questions, I can do other article(s) in greater detail. For example, there may be reasons to see a conference/division/team to see their individual team opponents.  For discussion’s sake:  What do you think?

I am also considering doing an article to allow you to schedule Pitt’s open P5 games based on availability of other teams for that particular year.

Editor’s Note:  Richard has done a good job of adding some though provoking questions but staying away from the proverbial third-rail.  I’ll do no such thing.  So I’ll pose two questions.

Thanks for reading and stay safe

Michaelangelo Monteleone Michaelangelo holds a degree in Travel Writing from the University of Pittsburgh. He was a former staff writer for InPittsburgh Newsweekly, and currently resides near Atlanta, Georgia. He has been a Pitt fan since 1997 after he witnessed Pitt upset #22 Miami on Thursday night at Pitt Stadium.
Published March 29, 2020April 3, 2020

203 thoughts on “Out of Conference Scheduling: Just How do They do It?”