First and foremost:  The unofficial Pitt POV tailgate will be in Red5A at 7:30 with breakfast of scrambled eggs and French toast and bagels around 9:00.  Special guest Commander Reed.  As per protocol, Fran is organizing with the help of some others.  It’s open to all Pitt fans (and even some Delaware fans if they choose to show up).  Look for the Pitt POV flag if it’s your first time, and feel free to bring something if you are going to stop by.  Be safe and have fun folks!

Now onto the prediction…

There has been some debate as to which Pitt team will show up tomorrow.  Many of us believe that Pitt has turned the corner, and the team will show up focused and ready to take care of business.  Other, cooler heads, are advising us that this is exactly the kind of game where Pitt will play down to the competition.  They may not be wrong.

And to be clear, if Delaware wins, it would be a bigger than Pitt upsetting UCF.  Pitt is a 24 point favorite and ESPN is giving Pitt a 96.6% chance of winning.  So the question is not if Pitt will win, but how.  Pitt could very well come out sloppy (or sleepy) and eke out a win by a touchdown or less.  We’ve all seen that script play out before. 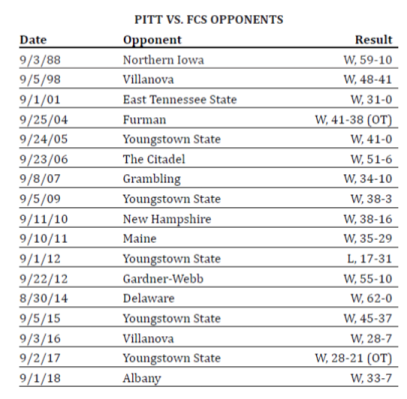 Here is Narduzzi’s record against the FCS:

If you go by the trend, we are due for a close one.  But things are different this year, right?

Well yes they are.

First of all, this is the first year that 100% of the team is made up of Narduzzi recruits.  From a cultural standpoint, that is significant.

Second, This team has the most talented defense in the Narduzzi era, especially on the defensive line.  Even if the offense sputters or comes out vanilla, the defense has played well so far and should continue to do so.

Third, and I can’t prove this, but I’d be willing to bet that this team has strong junior and senior leadership.  You don’t come back from 31 unanswered points unless the team is together.  They clearly are.

Of course, I could be wrong about all of this.

But I don’t think I am.  The offense won’t be spectacular, but the defense will be very good.

Postscript:  If the game goes as we all hope it will there will be plenty of opportunity for the backups to play.  Here is some info on  true freshman that have played so far this year.

Per PSN:  Davis is the only Pitt freshman that’s played in all four games to start the season. Linebacker SirVocea Dennis has played in three games so far. Three others have played in two games.

Michaelangelo Monteleone Michaelangelo holds a degree in Travel Writing from the University of Pittsburgh. He was a former staff writer for InPittsburgh Newsweekly, and currently resides near Atlanta, Georgia. He has been a Pitt fan since 1997 after he witnessed Pitt upset #22 Miami on Thursday night at Pitt Stadium.
Published September 27, 2019September 27, 2019