BREAKING:  Commander Reed Kohberger, blogger emeritus and founder of the Pitt POV has informed me that he’s going to start posting a guest column on the Pitt Blather on a regular-to-semi-regular basis.  Here is his first one.  This may be the best piece of media you read this week.

Not a lot of news from the Pitt Side this week, thanks to Pat Narduzzi’s media lockdown.

Perhaps in anticipation of said lockdown, at least one reporter asked Pitt Center Jimmy Morrissey about Penn State right after the Ohio Game.

And, even if there was, Jimmy Morrissey sees no reason in waiting around.

The junior center made sure his team’s attention turned toward State College shortly after head coach Pat Narduzzi’s side won a 20-10 affair with Ohio in an interview with reporters.

“I can’t wait,” Morrissey said, according to The Pittsburgh Tribune-Review. “I’ve said it before. I’m from the eastern side of the state, Philly area. I know a lot of people who go there. Some of my closest friends go to Penn State.

“I don’t like them one bit. That’s pretty obvious. I mean, I play for Pitt. I’m excited to play them.”

Penn State did not address the Panthers after the game, save for a brief comment from Franklin saying: “We have a really good opponent next week, and have to take the next step.”

So much for preventing bulletin board material.

Since Pitt is on lockdown, I’ve decided to take a look at the Penn State side of things, and bring you some content from central PA.  I feel dirty just looking at this stuff, and I already feel like I need a shower…well actually not if involves Penn State.

Here is a rather pedestrian preview of Pitt from the Black Shoe Diaries called  Know your Foe:  Pittsburgh

And here is the transcript of the James Franklin Press Conference, also courtesy of the Black Shoe Diaries.

Penn State thriving on the deep ball early.  Our cornerbacks better bring their A game.

You already heard this, but James Franklin would be open to continuing the series “at a neutral site“.  (Sooo…Morgantown?)

Penn Live throws out some tidbits in this piece, although the headline is basically better than the article:  Bracing for one final Penn State-Pittsburgh throwdown: The Lions’ dominance examined, inflammatory remarks, more storylines

A really good preview piece from Pittsburgh Sports Now where they interviewed Penn State football writer Cory Geiger.  This is a must-read if you haven’t read it already.

Also I’ll close with this.  It’s from the Clemson Blog Shakin’ in the Southland.  They published their ACC power rankings and put Pitt at #13 this week.  Clearly they are offended that we played them tougher than Notre Dame and Alabama last year.  Anyway here is what they wrote:

Pitt beat Ohio in a very meh 20-10 victory that kicked off at 11:00 AM because who nothing pairs with brunch quite as well as Pitt football. Now Pitt gets to travel to Penn State for a high noon rivalry game in State College that’s either going to be a painfully boring blowout or will result in Pitt happening and may be a fun game.*

*Author’s note: it will most likely not be a fun game. However the third quarter of a Big Ten game noon game tends to be the best time to squeeze in a nap.

At least they take the time to get in a shot at the Big 10, and I got no problems with that. 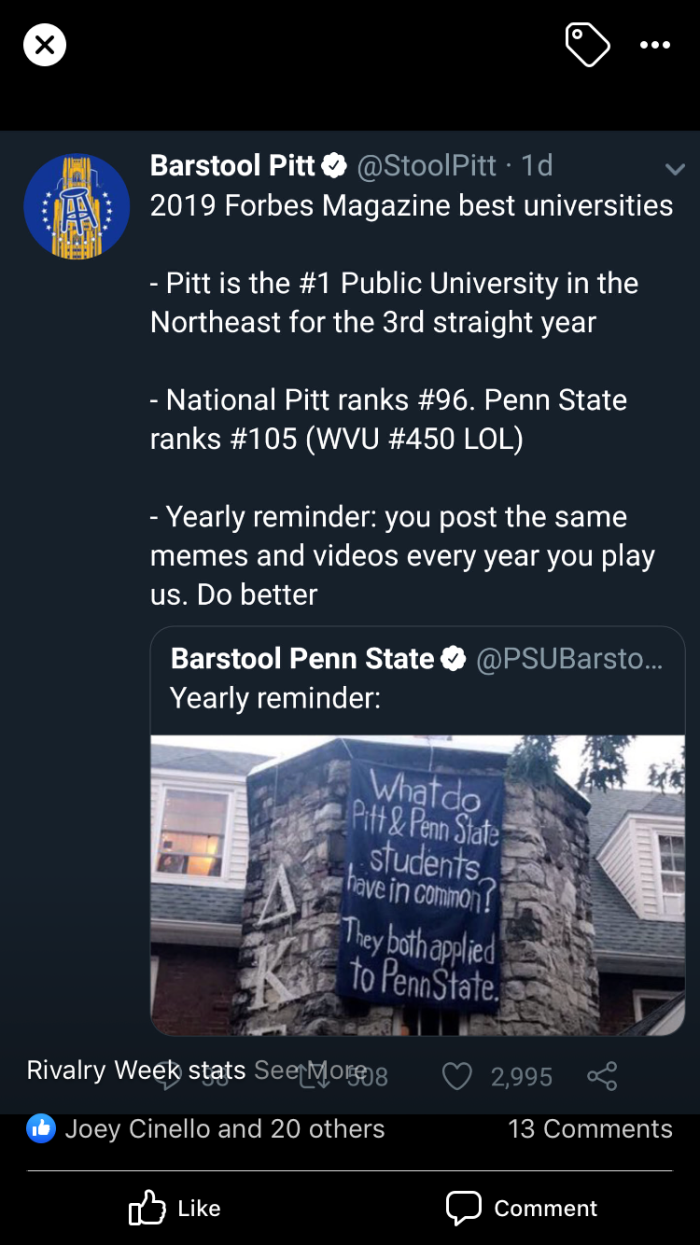 Michaelangelo Monteleone Michaelangelo holds a degree in Travel Writing from the University of Pittsburgh. He was a former staff writer for InPittsburgh Newsweekly, and currently resides near Atlanta, Georgia. He has been a Pitt fan since 1997 after he witnessed Pitt upset #22 Miami on Thursday night at Pitt Stadium.
Published September 11, 2019September 11, 2019