CBS Sports recently ranked college football’s top 50 quarterbacks.  The list, created by CBSsports.com writer Ben Kercheval, breaks the top 50 into four tiers, plus a tier for transfers.  While I don’t think anyone would expect Pickett to land in the top three tiers (All-American candidates, All-Conference candidates, and Established Starters), tier number four is the “Potential Breakouts” tier and well, someone who follows college football could make the argument that Kenny Picket could potentially be a breakout candidate.  After all he was just a sophomore last season, and he did have some ups, even though most people remember the downs.  So did he make it?  Read on to find out…

Tier 1:  These quarterbacks have All-American and award season aspirations, which include the Heisman Trophy

Tough to argue with those five, and the top three really stand out.  Also note Texas’  Sam Ehligner’s 16(!) rushing TD’s to go along with 25 TD tosses.  Not even the most ardent Pitt fan could expect Kenny Pickett to land here.

Tier 2:  These players include some all-conference selections and a few fringe Heisman contenders 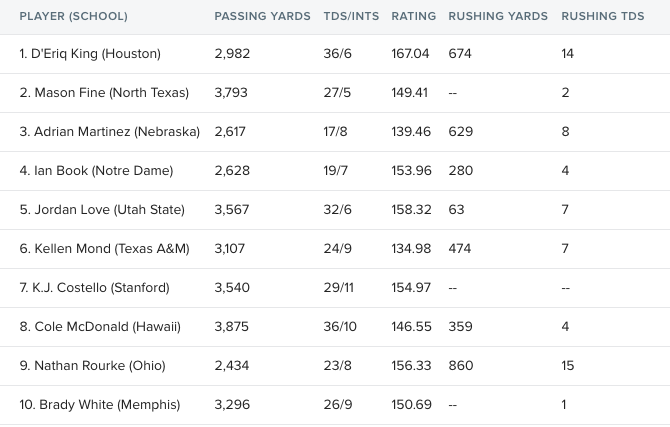 Lots of 3000 yard / 25+ TD guys here, and then there’s Ian Book.  I think I detect a Notre Dame bias…  (or maybe they just needed an “ACC” representative?)  Noteworthy:   We played both Book and Stanford’s KJ Costello last year and we narrowly lost to both of them (and with a better OC we’d have…oh well nevermind).  This year we’ll be playing Nathan Rourke (Ohio).  He looks like a poor man’s Sam Ehlinger.  Can’t say I’m looking forward to that.

Well technically Pickett is an established starter, but his numbers just don’t stand up to the guys on this list, and so I’m neither surprised nor offended that he’s not in this tier. Note that Pickett did beat two players on this list last season, and he’ll get to play them again this year (Bryce Perkins – UVA, Ryan Willis – VA Tech).  One could argue that our running game and defense beat them, but KP did make some clutch throws against both teams, so hey I’m dishing out credit.  I will also say that if KP finishes 2019 in this range (lets say 150 QB Rating) we should all be pleased and Pitt will probably win 8-9 games.

Tier 4:  You may knows some names in this tier, and others you may not, but you should keep an eye on all of them as they’re primed for breakout seasons

Okay so Pickett is… not on the list.  And I would say that about half of Pitt fans would say “Damn right he’s not on this list.  He sucked last year”.  And they would be right…some of the time.  Everyone agrees Pickett flat-out sucked against Clemson.  Everyone also agrees he kind of sucked against Stanford…and he pretty much sucked against Miami.  But I’ll be damned if Kenny Pickett didn’t also flash.  He flashed against Wake Forest.  He flashed against Duke.  And he made enough plays against Virginia to put that game out of reach.  And so my point here is this:   Here is a quarterback who threw the ball 300 times last season, threw two TD’s for every INT, has a passer rating that is better than 50% of the names in the “breakout” tier, and who is now playing under a noted passing guru and quarterback-whisperer, and he’s not on this list?  Look 50% of the guys on this list are not going to break out.  I see a guy from UAB.  I see a guy from UNLV.  I’m see Anthony freakin’ Russo from Temple who threw 14 picks last year.  I know Kenny Pickett has talent. (You don’t drop it on a dime in the endzone to Maurice Ffrench for the Game Winning TD if you don’t have talent.  I’m sorry you just don’t.  GWTD’s like that just don’t happen unless you are actually good at football).  I also know that Kenny Pickett is inconsistent.  I think Reed mentioned something about “issues between the ears” recently, and I would agree.  But unlike many fans (Reed may or may not be among them), I also believe that a year of film study, a year of visits to the sports psychologist (Pickett would be a fool not to) and a year of Mark Whipple’s coaching can rectify these issues.  Put Pickett down for a Pitt POV breakout candidate, CBSsportsline be damned.