A Body in Motion

Chris Peak must have read my mind this week because the first thing in his 3-2-1 column was this:  It’s interesting to look around at Pitt football fans right now. They are, for the time being, a pretty content bunch. Perhaps even happy. Dare I say optimistic.

Coincidentally (before I read the column, believe it or not), I happened put together this graph:

As this very scientific chart illustrates, Pitt football fan sentiment is at ten-year highs.   Since the firing of Shawn Watson, Pitt and Pitt football have done just about everything right, and besides a 9 win season and a bowl victory (and maybe a few four-star recruits – cue open skepticism…now), there is little else that Pitt football can do right at this point.

Except for maybe this…

Now the land acquisition piece at this point is mere hearsay, but the administration’s desire to do a feasibility study is apparently real.  That desire, coupled with Pitt’s current momentum has the Facebook Fanbase titillated.  The momentum is so strong amongst my generation – the Gen X fans who were not spoiled by the Majors / Sherrill era, and not jaded by the decade that followed – that a few leaders have started to talk about how to get behind Pitt in a bigger way, and surprise, surprise, the administration is supporting it.

Editor’s note: I would like to be abundantly clear that this is not Jeff Ferruzza’s initiative. He was simply the one who brought visibility to it in an effort to gain fan feedback. MM

Yes I know, many of you will grumble and say “golden panthers this” and “it will go away if the football team doesn’t win that”, or “I got that tattooed on my a** thirty years ago”.  Well that may all be true, but I have two things to say in response. 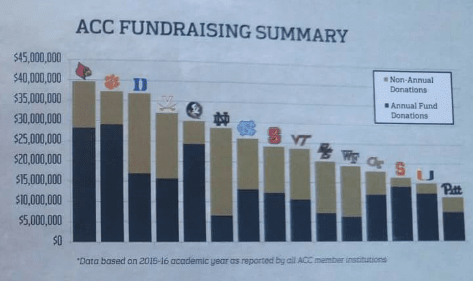 Yes.  That.  Pitt was dead last in alumni fundraising in 2015-2016 and we are probably still dead last.  Texas Panther has been saying as much for a week now (He’s probably been saying it much longer , but he re-articulated his position very nicely in the past week), and he is right.  PITT NEEDS MORE.  It needs more from the fans so that we put ourselves in a position to win sustainably in the ACC.  And it all starts with Football, “the front porch of the front porch” if you will.  If we can figure out a way to get more fans engaged and giving, we will have an advantage, and we will have a voice, and we will be much more likely to get what we want.

Do you want an On Campus Stadium?  How about 40,000 fans giving $10 a month?  That’s $4.8 M per year.  By the time the Heinz Field lease expires ten years from now that’s $48 M.  Add in a couple of big donations and we’ve got a down payment and money to pay for financing.

This is something we can all get behind.  I’m in communication with the leaders of the Facebook group and they want to hear your ideas to engage the fanbase.  What resonates with you (or your kids for that matter…)?  What would motivate you to do more?  What could Pitt be doing better to engage all generations of Alumni (and fans) and boost Pitt into the top third of ACC fundraising?  Many of the folks on this board already give A LOT, and that is excellent, but many more (myself included) can do more.  This is a tremendous opportunity to help the football program we bleed for, so speak up.

Michaelangelo Monteleone Michaelangelo holds a degree in Travel Writing from the University of Pittsburgh. He was a former staff writer for InPittsburgh Newsweekly, and currently resides near Atlanta, Georgia. He has been a Pitt fan since 1997 after he witnessed Pitt upset #22 Miami on Thursday night at Pitt Stadium.
Published April 20, 2019April 20, 2019