The Last Week of Spring Ball

It’s been an interesting couple of days.

Pitt’s big unveil was an unquestionable success, with ahem the large majority of Pitt fans getting behind the new colors and logo with enthusiasm.

Nearly lost in all the hubub is the fact that Pitt Football also landed their first recruit of the 2020 class.  Samuel Williams is a 6’4″ 205 lb “defensive end” from Ft. Lauderdale, Florida.  I put “defensive end” in quotes because it’s clear from his game film that Williams is a tall and fluid athlete more than anything else.   If you watch his film long enough they’ll flip to his TE highlights, where he regularly is the fastest guy on the field.

Williams is ranked a 5.5 from rivals, and he had two offers besides Pitt, South Florida and Syracuse.  What’s also obvious from Williams’ game film is that he is a man among boys out there, mostly likely because he plays for 3A (384-749 students) Calvary Christian Academy.  This is basically the level of high school football I played in Pennsylvania and I’m 5’11 – 160, and not fast.  And yes he would have looked very good against Jim Thorpe Sr. High (my alma mater) as well.

Nonetheless, Williams has the athleticism that puts him squarely in the “diamond in the rough” category, and if the staff can put some weight on him and coach him up, he could definitely turn into a contributor…cue rabble of angry Pitt fans complaining about his star ranking.  Well like it or not, the staff has chosen to go down the “athletic three star” road and they will live or die by the philosophy they’ve chosen.  Either way, earning a scholarship is a great accomplishment for Samuel so congratulations to him and may we hope he turns into the next Rashad Weaver (or Jabaal Sheard or Greg Romeus).

Here is the link to his highlight video

Back to spring ball, Pitt’s rebranding included new practice unis and that was the first news that broke today.

and just for fun…here were the first two fan reactions: 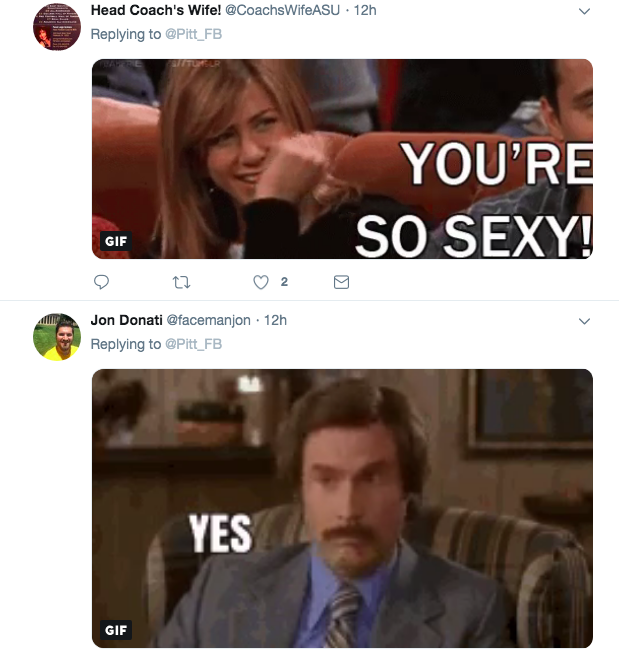 So yes, a lot of buzz in Oakland and on the Southside and in the Pitt Universe in general.  And I’m pretty sure this means Pitt will also be wearing the new unis for the Spring Game.

Speaking of the Spring Game, it’s this Saturday at Heinz.  Kickoff at 1 p.m.  As long as the weather holds, it should be a decent day for some drinking of beer and watching of football.

Speaking of football, Pitt practiced today, and they scrimmaged on Saturday, so we got a double dose of info during today’s interviews.

Kenny Pickett is clearly taking his coaching well, because he said basically nothing of interest.  On the other hand, if camera presence equates to pocket presence (maybe it does?), then hope should spring eternal, because young Mr. Pickett has clearly progressed.

Todd Sibley on the other hand was one of the better player interviews of the Spring.

“We’ve established all spring that we can throw it”

“Coach Whipple has us lining up all over the field.  We’re lining up at wideout.  We’re lining up in the slot.  He has us doing things that we weren’t normally doing last year.  His key thing is scoring touchdowns and getting playmakers the ball.  That’s what Whipple does”

“[Last year] I won’t say they weren’t concerned for our passing game, but they definitely weren’t as concerned as they were for our running game”

AJ Davis is a man of few words…

Whipple gave us a few nuggets.

“I think we found a few more receivers”

“AJ Davis been good, Sib’s been good, V’Lique’s made some plays outside.  Ffrency.  Taysir.  I thought Dontavious.  Aaron Matthews.  Tre’s [Tipton] been good”

“No question that we can [throw deep].  People, they know i like to throw deep.  I don’t think you can’t have an intermediate passing game unless you can take the top off, and we’ve got guys who can do that”

And of course the ‘Duzz is always one of best interviews in the business, even if you can only trust 50% of what comes out of his mouth.  Note the special bond he shares with Jerry DiPaola at the end.

“I don’t know if you guys heard, the offense won the scrimmage”

“The defense looked good too”

Question:  How did the run game look on Saturday?  “Well…you know… it depends on who they were running against”

“AJ…turns a two yard run into 12, and you know Sibley…is a physical dude”

Last but not least, the Spring Game player draft has been moved to Thursday after practice, so stay tuned for our big Pitt POV Spring game preview sometime after they publish the rosters.

Michaelangelo Monteleone Michaelangelo holds a degree in Travel Writing from the University of Pittsburgh. He was a former staff writer for InPittsburgh Newsweekly, and currently resides near Atlanta, Georgia. He has been a Pitt fan since 1997 after he witnessed Pitt upset #22 Miami on Thursday night at Pitt Stadium.
Published April 9, 2019April 9, 2019

112 thoughts on “The Last Week of Spring Ball”