We have Johnny Majors to thank.

Or maybe to blame.

He invented the Pitt script as we know it today.

And if he had never decided to use it, it would never have been taken away.

I’m stealing this from Reed, who borrowed it from the New York Times.

When Majors arrived on campus from Iowa State, taking over a team that had won only one of 11 games the year before, he decided to give the program a makeover in every way. He put together a real weight room, but he also wanted his team to look good on Saturdays.

“I looked at their uniforms, and I thought they were pretty dull,” Majors said.

So Majors redesigned them. The school colors are old gold and navy blue, but Majors decided that a mustard yellow and royal blue looked sharper — in part because Pitt would not resemble the Notre Dame Fighting Irish as much.

He added double “Northwestern stripes” (one wide stripe bordered by two thinner stripes) to the jerseys and a thick blue stripe, a nod to the N.F.L.’s Pittsburgh Steelers, to the pants. He wanted a helmet insignia that stood out in newspaper photos, on television and on magazine covers. Majors dreamed big from the start.  Majors liked the “Ucla” script insignia on U.C.L.A.’s helmets. So he told an artist whose name he cannot remember, to draw something similar for Pitt. 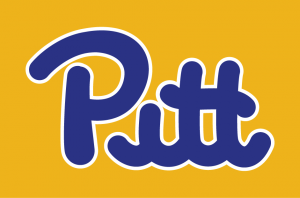 Of course former Pitt Athletic Director “smiling” Steve Pederson undid it all after he fired Majors in 1996, and replaced the Script with the now-infamous “Dinocat”. 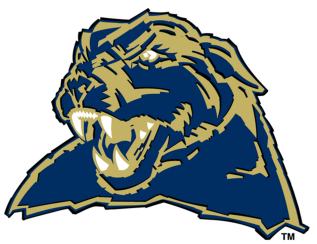 To add insult to injury Pederson backed it up with the slightly-less-infamous and yet equally embarrassing “Wet seal”, also sometimes referred to as “Otterdog”

The Otterdog fortunately never made it onto any team apparel, and the Dinocat was mercifully put down during the Dave Wanstdadt era.  Pitt then moved to the safer and more conservative block Pitt logo.

Then in 2016 the administration finally came to its senses and brought back the script.  There were some subtle differences between the old and the new, but overall this was widely regarded as a very good move, even if we did keep the “Notre Dame” color scheme of navy blue and gold.

Pitt then took things a step further and introduced “retro” uniforms, which were worn on a part time basis.  Even through the colors weren’t quite the same as the mustard yellow and blue of the glory days, they clearly were a step in the right direction.

Today, Pitt will unveil yet another iteration of its logo across all 19 sports programs.

The Reveal, as it’s being billed, is kind of a big deal.  It’s scheduled for 4 p.m. today at the  “Bigelow Bash” (which ostensibly is some kind of party from 1 – 6 p.m on Bigelow Boulevard.  Kids these days!).  And…this “Reveal” is the culmination of many years of work from the Nike Corporation.

It’s widely expected that Pitt will make some form of their current retros permanent, and probably add some small tweaks to the uniforms.  This would be both a popular and sensible thing to do.

So really, until the reveal happens, I have only one thing to say “Hey Pitt, don’t screw this up”

Editor’s note:  I wrote this yesterday and today it looks like there are leaked logo images on social media.  Rumor has it that the Panther head is the secondary logo and it was inspired by the Panther Fountain at the Cathedral of learning.  It would be a major blunder if Pitt replaced the script with this new cartoon panther head as their primary logo on helmets, basketball uniforms etc, and so hopefully they (and the people at Nike) are smart enough to realize this.  The unveil is at 4 p.m. EST so lets see if they get it right.

Michaelangelo Monteleone Michaelangelo holds a degree in Travel Writing from the University of Pittsburgh. He was a former staff writer for InPittsburgh Newsweekly, and currently resides near Atlanta, Georgia. He has been a Pitt fan since 1997 after he witnessed Pitt upset #22 Miami on Thursday night at Pitt Stadium.
Published April 7, 2019April 7, 2019

257 thoughts on “A Logo Retrospective”