In light of the recent article Mike put up the other day and our responses to it I’d like to share a Rivals.com Podcast by Chris Peak that addresses both subjects very well.  It was done last week and you should listen at least from the 3:00 mark to 6:15 or so for his take on media access then the rest of the podcast is about ‘What happened to the 2016 recruiting class?”

I wanted this up for readers to listen to because he echoes exactly what I have been saying about the total shutdown of information save for what is force fed us from Pitt and the football staff.

Now – Chris’ idea of what makes a “star” player differs from mine.  My criteria is that the player be named to All-ACC 1st or 2nd teams or, of course, All-American.  His is that the player plays well in his role as a starter.  But that aside – I agree again with his ideas here.

2016’s class was just as Peak says it was – hyped to hell because it was Narduzzi’s first full recruiting class and it held five 4* recruits.  Here it is: 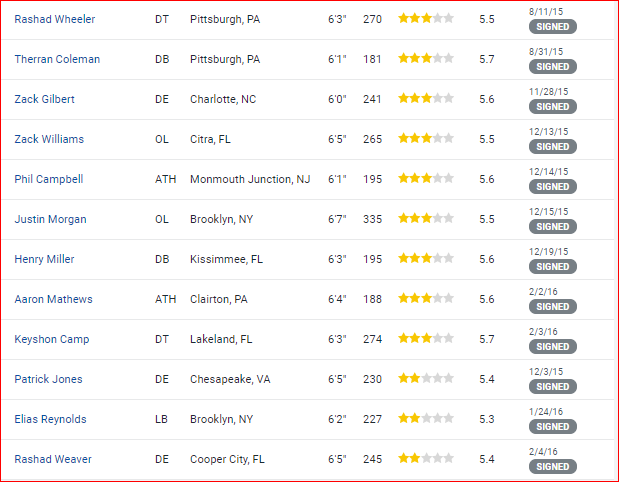 Granted these kids have a year or two left but the reality is most often that ‘star’ players usually show their talent and worth in their first three years.  There are exceptions sometimes – RB Darrin Hall is one who broke out in his SR season, but really, if a kid hasn’t shone by the time their third year rolls around odds are that they will continue to be basically regular players.

In other words Pitt has to field 22 starters and someone has to do it.

And that is what Pitt has had last year and I believe, going into the 2019 season. The fact is that out of those 24 players who joined in the 2016 class only one has made any post-season teams and that is 3* WR Maurice Ffrench.  Peak lists two others – DB Hamlin and DL Weaver are the other two but I wouldn’t call them “star” players…  good players yes, great players? No.  I think Peak calls them “major contributors” – that I can agree with but IMO they aren’t star players (yet).

Honestly, I see much the same when I look at Narduzzi’s 2017 and 2018 classes also.  We are becoming a roster overwhelmingly full of 3* players and thus are playing (less than) 3* football over the last two seasons.  This is why PN has to rely on so many transfer players who come in for a season. The recruits he’s been able to convince to come to Pitt have been lacking.

Some kids will surprise – that happens every year  but I think we have to keep fingers crossed with both hands to hope we get play above what it looks like we’ll get.

Michaelangelo Monteleone Michaelangelo holds a degree in Travel Writing from the University of Pittsburgh. He was a former staff writer for InPittsburgh Newsweekly, and currently resides near Atlanta, Georgia. He has been a Pitt fan since 1997 after he witnessed Pitt upset #22 Miami on Thursday night at Pitt Stadium.
Published April 3, 2019April 3, 2019