Narduzzi is Actually Better Than Dabo…Kind Of

Signing day has come and gone, without the fanfare of yesteryear where expectant Pitt fans sat by the computer watching the commitments roll in.  The fan base has early signing day to thank for that, and this past Wednesday was a quiet one day because of it.

You could argue that the two biggest commits that Pitt trotted out for the media were new Offensive Coordinator Mark Whipple and new Wide Receivers Coach Chris Beatty. Both of the new coaches were at the LOI event on Wednesday, and both DiPaola and Batko have done a nice job of writing up the Whipple interview.

One of the more interesting quotes to emerge Whipple was the “What’s it going to take to beat Clemson?” question that he asked the quarterbacks.  It is a question that is dripping with insinuation, especially during an offseason filled with so much angst and so much promise.

First, Whipple was insinuating that Narduzzi wants to beat Clemson.  Well the truth is that everybody wants to beat Clemson, but on the other hand, Pitt does not play Clemson in 2019.  So if we read between the lines, we can infer that Pat Narduzzi believes that the team can repeat as Coastal Division champions.   And why not?  The coastal is shaping up no better in 2019 than it was in 2018.  Here is a quick look at the teams:

Miami – Probably the odds on favorite due to sheer talent, but all bets are off when there is a new Head Coach and Coaching Staff.  Plus, Pitt has an axe to grind and we get them at home.

Georgia Tech – Brand new coach and switching from triple-option to conventional offense means there will be growing pains.

Virginia – Loses their most dynamic offensive playmaker and talent level is no better than Pitt.  Plus our zone blocking scheme does very well against a 3-4 front.

North Carolina – I’m going to say it here first; I am not buying the Mack Brown hype.  The man is past his prime.  Here is a guy who completely let the program get away from him at Texas despite stellar recruiting classes, and who has been away from football for six years.  His hiring reeks of Johnny Majors II.  Plus with Fedora gone we may finally have a chance to beat them.

Pitt – We’ve upgraded our offense via coaching (I am assuming Whipple and Borbley wave their magic wands here and somehow conjure up a competent offensive line), and we did not lose anyone significant from our defense.  The truth is that any team on this page can take the Coastal, so why not Pitt?

So yea, it’s conceivable that Pitt, behind a re-invigorated offense and a sightly-more-talented and still-manned-with-mostly-juniors-and-seniors defense that Pitt can repeat as Coastal Division Champs.

And if you read the Batko Piece or watch the Whipple interview you’ll see that the players believe it too.

“These guys have got a look in their eye like they’re ready to make a next step,” Whipple said Wednesday. “You don’t know that till you meet them.”

But what right do they have to believe?  After all, if you read all the opinions out there and look at all the stats its pretty clear that Pitt is a mediocre program, Narduzzi is a mediocre coach and the team is filled with mediocre players.

Well there is that whole Pitt-was-the-only-team-who-beat-Clemson-at-their-place-in-the-last-four-years thing.  Yea, people will say, Duzz did it with all Paul Chryst’s players.  (Except for that transfer Quarterback, he was a Narduzzi guy).  Yea, people will say, transfers are all band-aids and don’t truly reflect Narduzzi’s recruiting or coaching abilities.   (They are right, but for better or worse, at least he is recognizing the need and doing something about it).  I for one do not care how the product is put on the field, I just care that there is a quality product on the field.

Now the question of quality is surely up for debate, and is indeed subjective when debated.  I for one would like to try to add some objectivity to this disucssion.  I’ve been doing some reserach and I’ve come up with some evidnece that as crazy as it sounds, Pat Narduzzi is actually doing a better job than Dabo Swinny through the first four years of his head coaching tenure…at least in some areas.

A few of things have to be noted here because Dabo came into a unique situation:

So here is the breakdown. I compared Dabo and Pat’s first four years in the following categories:

In order to get an empirical measure of improvement I compared the current coaches’ first four-years’ results against the previous four years’ performance, and then found the percentage increase or decrease vs the previous coaching staff(s).  The numbers were pretty interesting.

Okay, so in all seriousness, where does this leave us?  First of all I will acknowledge that none of this solves for the fact that Narduzzi still doesn’t reel in a lot of four-star recruits, and he still hasn’t won a bowl game. It also doesn’t solve for Narduzzi’s perceived personality issues and Duzz’s perceived issues around hiring and retaining staff.  However, what it does show you is that on a percentage basis, Pat has actually moved the needle farther than Dabo did during Dabo’s the first four years, and farther than I think a lot of Pitt fans give Pat credit for, and that in and of itself is something.

So to wrap it all up, I’m not going to sit here and sing the praises of Pat Narduzzi.  He’s been solid and he’s pulled out some surprises.  He seems like he’s improved his coaching staff over time and generally learned from his mistakes.  Is Pat the perfect coach?  No, at least not yet.  Are Pat’s recruting classes trending in the wrong direction?  It would seem so.  Has Pat won more regular season games on average than his immediate predecessors?  Yes.  Has he done it against a tougher schedule?  The answer again is yes.  Lastly, has Pat Narduzzi, despite massive staff turnover and what could be considered a pretty weak OC during the last two seasons, empirically improved recruiting?  Yes he has.

While Pat hasn’t transformed the program to the degree that many fans were wanting in the last four years, there are signs that point to a methodical process, and more importantly methodical progress.  The 2019 season, of course, will tell the tale.  Regardless of what side of the fence you sit on, your expectations should be high.  If you are a naysayer, then 9 wins are what Narduzzi needs to stay off the hot seat.  If you are an optimist, then 9 wins is where we should be given all the talent coming back.  Either way, I believe that with the addition of Whipple and Beatty and the retention of the rest of the staff, Pat has the best overall coaching staff of his tenure, and I’m sayhing that it will pay dividends. 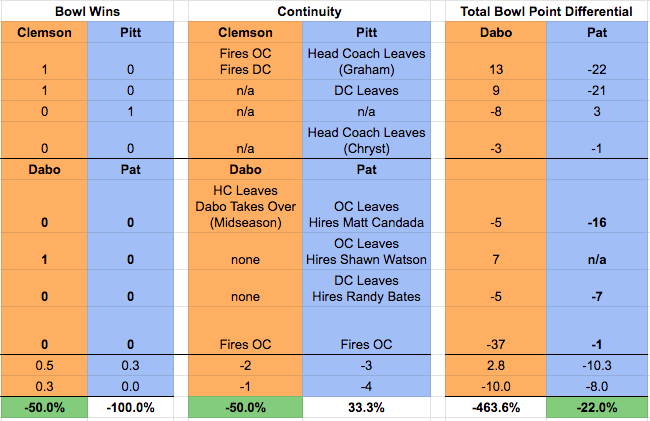 Michaelangelo Monteleone Michaelangelo holds a degree in Travel Writing from the University of Pittsburgh. He was a former staff writer for InPittsburgh Newsweekly, and currently resides near Atlanta, Georgia. He has been a Pitt fan since 1997 after he witnessed Pitt upset #22 Miami on Thursday night at Pitt Stadium.
Published February 11, 2019February 26, 2019

215 thoughts on “Narduzzi is Actually Better Than Dabo…Kind Of”