I’ll start with this, not because I live in the South and it’s relevant to me, but because I think it nicely illustrates the point that no matter what happens with this OC search, and the Pitt team in general, there are going to be some fans that are unhappy.  That’s just a fact of life.

Of course I’m pretty sure all of these tweets are in jest, but with Crimson Tide fans you just never know.  A six pack of Busch + a couple of generations of too-close cousins + a cut-rate Android phone can make just about any night of the week interesting on the Twitter.

Okay on to more relevant Pitt Business.  If you haven’t heard, Pitt is searching for a new Offensive Coordinator.  This is arguably the second-most important coaching position on the staff and it’s kind of a big deal.

So what do we know so far?

There have been no concrete rumors, other than than a certain Matt Canada tidbit.  I think Brian Batko summed it up best in his recent football chat transcript:

SOMD Panther: Any updates on the new Head Coach of the Offense?
Brian Batko: Are you asking if it will become one of those endowed positions, like the University of Pittsburgh Ron Cook Coordinator of Offense? I picked him because he seems to often be offensive to Pitt fans.

The only name I know for sure has had interest is Matt Canada, Part Deux. I know this because our very own Joe Starkey said it on his radio show yesterday afternoon. But it’s still unclear how much interest there is from either side of that equation, and I wonder if even Canada and Pat Narduzzi themselves quite know how interested each one is just yet. As I wrote earlier this week, it might be something of an awkward marriage for those two to get back together, but from a football perspective, it makes all the sense in the world to me.

It makes sense for me too.  Primarily because Watson was supposedly forced to keep Canada’s offensive terminology in place and adapt his playbook, instead of installing a third offense in three years.  (Noteworthy:  DC Phil Bennet also did this during the Wannstadt years, with much better success).  So you would think that there would be some instant upside next year if Canada and Narduzzi were to figure something out. 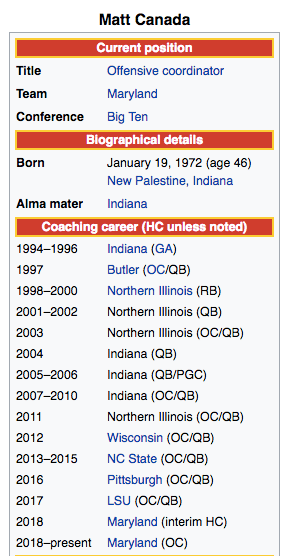 PSN tells us that Canada did turn down a second stint at this Alma Mater (Indiana) reportedly due to lack of control over his assistants, and that he is “very much interested in the job and would love to return to Pitt, but would wants to be a head coach in the future”.

Which begs the question…is Canada holding out for the coveted NIU head coaching job?  (Which is still vacant at the time this article was written…)

Speaking of time, if MC does come back, any tenure longer than one year should be considered a bonus (no matter how big the buyout…)

Another name that has surfaced is Toldeo’s Brian Wright, who presided over the nation’s 30th ranked offense last year (9th if you go by points scored).  There seems to be a fair amount of trepidation from the Pitt fanbase around hiring someone from ahem the Mid American Conference, but I will remind the good people of Pittsburgh that their third-favorite-quarterback-of-all-time (after Bradshaw and Marino of course) was also recruited from the MAC (I’m talking about Ben Roethlisberger here).   Ahem indeed.  I’ll also remind them that two of the four active coaches who have won national championships coached in the MAC (Saban and Meyer)…well technically Meyer is no longer active, but you get the idea.

The nice thing about Wright is that it appears that he is more than a one-trick pony.  From the Toledo Athletic Website:

Brian Wright is in his third season as the Rockets’ offensive coordinator and quarterbacks coach. Under Wright’s guidance, UT has been at or near the top of the Mid-American Conference in virtually every offensive category in each of the past three years, with numerous school records falling in the process.

Additionally Mr. Wright (as opposed to Mr Wrong I suppose…) was also nominated for the Broyles Award in 2017, just a year after our own Matt Canada received the very same nomination.  Wright’s offenses at Toledo have never been ranked less than 19th in points scored, but it’s fair to point out that he did inherit a pretty strong offensive program.  Toledo averaged 34 points per game the four years prior to Wright taking the reins, and they averaged 38 points per game after Wright took over.  Assuming his immediate hire would add +4 points to Pitt’s per-game average (just like it did at Toledo), that would put us up to 29.6 PPG, which would have netted +2 wins if we could have achieved that in 2018 (UNC and Stanford).

Of course if Wright was interested, he probably would have been hired by now…

A possible third name (or it could also have been Wright) has been surfaced by Jim Hammet at Rivals.  It’s insider stuff, and I haven’t gotten around to signing up yet, but here is the link.  Out of professional courtesy for the good people at Pantherlair, I’ll ask you not to spill the beans if you are a member.

After that it’s all pure conjecture.

There is a previous potential candidate who is no longer available…

There is some pure speculation from Cardiac Hill...

I’ll admit there are a couple of interesting names on the Cardiac Hill list that I haven’t sen before, so kudos to author Mike Wilson for doing his homework.

There are also some other names circulating out there, but none with any credence… Mark Magino (shudder), Tee Martin (meh), Mike Uremovich (WTF?).

All I know for sure is that Narduzzi has historically taken his time on these types of things…or at least taken his time announcing them.  So don’t hold your breath Pitt fans, it could be a while.

Michaelangelo Monteleone Michaelangelo holds a degree in Travel Writing from the University of Pittsburgh. He was a former staff writer for InPittsburgh Newsweekly, and currently resides near Atlanta, Georgia. He has been a Pitt fan since 1997 after he witnessed Pitt upset #22 Miami on Thursday night at Pitt Stadium.
Published January 10, 2019January 11, 2019