How in God’s Creation Did You Become a Pitt Fan???

Here is another “Bio” piece, this one by long time reader and frequent commenter “Pittman4ever” (Jim Gianoutsos).  I strongly urge all of you to take a moment to jot down your own earlier Pitt memories and I’ll post them then compile them into a set piece later. Add photos if you like – or I’ll add some visuals here and there – and send it to me as a Word attachment via email. But please chip in…

We all have our own story as to how in the world we became fanatic Pitt fans!!!  The following is my story and I look forward to hearing yours!

…..It all started in 1923 when an immigrant couple originally from a speck of an island in the Greek Isles gave birth to their third child, Nicholas James (my Dad). The Gianoutsos house (pronounced “Ja – new’- chess”) was on a large hill on upper 5th Avenue, known in that day as the “SoHo” section of Fifth Ave.

My father grew up within a walking distance of Oakland and Pitt Stadium back when the Panthers were the greatest college football team in the world, winning National Championships in 1929, 1931, 1934, 1936, and 1937 (not to mention 1915 & 1916). He used to tell me that when Marshall Goldberg was part of the famed “Pitt’s Dream Backfield” the Pitt Center would point to where the run play was going just to let the opposing team’s defense know – and they still couldn’t stop it!

He also shared the story when one Saturday the Panthers were playing a big game and to his chagrin, the game sold out early. No problem! He rounded up about a 100 guys who were also without tickets and they rushed the main gate, getting in with little resistance!

As students were lining up for the national anthem at his Fifth Avenue High School graduation ceremony rehearsal, someone behind my dad started messing around and slammed into him. 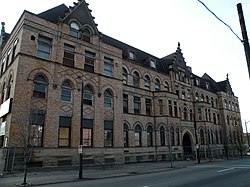 When the Principal looked up he assumed it was my dad who was disrespecting the flag and he berated him in front of his classmates as one of “those foreigners” who disrespect our nation.

My dad got so upset (as he was highly patriotic) he ran up and punched out the Principal!  The Vice Principal had actually seen what had happened, talked to the Principal and took my dad aside and said all he had to do was apologize to the Principal and he could still get his diploma and graduate.  My dad told him if anyone needs to apologize it’s the Principal, not him! He also threw in that he’d make more money in their family painting business than he ever would with that diploma (which he did)! He then walked out of the rehearsal and went downtown to the nearest Army enlistment office and joined on the spot.

Four years later my dad returned from WWII having fought under General Douglas MacArthur in his return to the Philippines, where he made five first wave beach landings as part of the Army’s 40th Division. There were only a few men who returned with my dad from his outfit.

Afterwards he and his brother took over Gianoutsos Brothers Painting, which my grandfather (Jim) and his brothers started in 1913. It grew into the largest painting company in Pittsburgh painting such iconic structures as the Liberty, Smithfield, West End, 9th and 16th St. bridges, Allegheny General Hospital, the Civic Arena, Kaufman’s, and Forbes Field prior to the 1960 World Series, to name just a few.

One of the first things dad did after returning home from the war was to marry my mom (from Southside, pronounced “Sasside”) and buy Pitt football season tickets, which he still held while I was growing up. Going to Oakland, buying a hotdog, walking up Cardiac Hill, and then rooting for the PITT PANTHERS was how I was raised.

And in doing so I learned early on really important things like; Pitt has the greatest football tradition in the nation, always hate Notre Dame, Penn State was our little sister for decades, and there is nothing greater in all of sports than Pitt’s blue and gold!

In the mid 70’s I bought my own season tickets in Section 4 (just a row or 2 below our famous POVer Lastrowsection4!  My young bride and I would go to the Black Angus every pregame for their famous Greek soup (Chicken Avgolemono), climb Cardiac Hill, enter the lower gate into the underbelly of the historic stadium and walk the ramps upward hundreds of feet in elevation just to get to field level! Then up the steps of Section 4 to the top of the world where from 1976 to 1982 we watched the greatest team on planet Earth.

Editor’s Note: Jim really  “get’s it” with this piece.  He weaves together his life’s tale as well as his ancestors’ stories to give us a lovely look at what his early life in Pittsburgh was like and the influences which made him who he is today.  Notice that this isn’t all about Pitt football either,  we already know what sort of Pitt fan he is (crazy), but now we know more about Jim our friend personally. Great job Pittman4ever!!

Michaelangelo Monteleone Michaelangelo holds a degree in Travel Writing from the University of Pittsburgh. He was a former staff writer for InPittsburgh Newsweekly, and currently resides near Atlanta, Georgia. He has been a Pitt fan since 1997 after he witnessed Pitt upset #22 Miami on Thursday night at Pitt Stadium.
Published May 9, 2018May 10, 2018

74 thoughts on “How in God’s Creation Did You Become a Pitt Fan???”