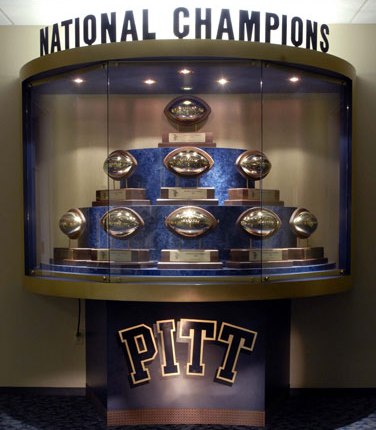 The group is composed of Olympians, national champions, Super Bowl winners, world-record setters and legendary figures whose names and achievements resonate well beyond Pitt. There are 12 living honorees and four posthumous inductees.

“It is with tremendous pride that we present the inaugural class of the Pitt Athletics Hall of Fame,” Lyke said. “These individuals represent Pitt’s Gold Standard and we are greatly looking forward to honoring them at our official induction ceremony in September.

“I love to remind people that Pitt could have its own wing in so many different halls of fame. Our athletic history is that rich and accomplished. I certainly tasked the selection committee with a huge challenge in trying to pare down 150 years of history for this inaugural class. In looking at our many deserving candidates, it is obvious that this 2018 group will be the first of many legendary Hall of Fame classes at Pitt. We’re thrilled to celebrate their achievements with a fitting showcase.”

Listed in alphabetical order, these are the members of the inaugural Pitt Athletics Hall of Fame class and their primary sport of distinction.

Nominations for the Pitt Athletics Hall of Fame were solicited from the general public in January and accepted through March 31. Candidates had to be five years removed from their final year of collegiate competition and not currently be playing professional sports. An 18-member selection committee then evaluated the candidate pool and provided a recommendation on the inaugural class to the director of athletics.

The inaugural class will receive induction at the Pitt Hall of Fame Dinner on Friday, Sept. 7, at the Petersen Events Center. On Saturday, Sept. 8, the inductees will be introduced at Heinz Field when the Panthers host historic rival Penn State. For Hall of Fame Dinner ticket information and event updates, go to www.pittsburghpanthers.com/HallofFame. For additional questions, please contact Executive Director for Strategic Initiatives and Engagement Kelly Brennan via email (events@athletics.pitt.edu) or phone (412-225-3081).

Carlson stands as one of Pitt’s first multiple-sport stars and later gained legendary status as a head coach. He earned four letters in three different sports: football, basketball and baseball. Carlson was a football All-American at end in 1917 under Coach Glenn “Pop” Warner. During his four-year career on the gridiron (1914-17), Carlson helped the Panthers achieve a 34-1 record. In 1920 he earned his M.D. degree from the University of Pittsburgh’s Medical School, which spawned his nickname “Doc.” Carlson became Pitt’s head men’s basketball coach in 1922, leading that program for 31 seasons. Under his guidance, the Panthers claimed Helms Foundation National Championships in 1928 and 1930. He still holds Pitt basketball coaching records for wins (367), games coached (615) and seasons coached (31). Carlson was inducted into the Helms Athletic Foundation Hall of Fame (1949), the Naismith Basketball Hall of Fame (1959 inaugural class) and National Collegiate Basketball Hall of Fame (2006 inaugural class).

In three varsity football seasons (1958-60), Ditka led Pitt in receiving each year and was also a standout defender and punter. He additionally played baseball and basketball at Pitt and was the intramural wrestling champion. As a senior in 1960, Ditka was a unanimous All-America selection at end. The Chicago Bears’ No. 1 draft pick in 1961, Ditka would play 12 professional seasons, including six with the Bears (1961-66), two with the Philadelphia Eagles (1967-68) and four with the Dallas Cowboys (1969-72). The 1961 NFL Rookie of the Year, he earned All-NFL in each of his first four seasons and was a Pro Bowler his first five years. He was part of Chicago’s 1963 NFL title team and the Cowboys’ 1971 squad that won Super Bowl VI. Ditka worked as an assistant coach at Dallas for nine seasons, spent 11 seasons as Chicago’s head coach (winning Super Bowl XX) and spent three seasons as head coach of the New Orleans Saints. Ditka was elected into the College Football Hall of Fame in 1986. He became the first tight end elected to the Pro Football Hall of Fame when he received enshrinement in 1988. Ditka’s No. 89 Pitt jersey is retired.

Dorsett is the only Heisman Trophy winner in the history of Pitt football, receiving that coveted award as a senior in 1976. He additionally received the Maxwell Award and Walter Camp Award that year. Dorsett earned All-America status in each of his four collegiate seasons (1973-76). He was the first player in NCAA history to reach 6,000 career rushing yards. Including bowl games, he rushed for 6,526 yards. Dorsett’s NCAA-recognized total (not including bowls) of 6,082 yards stood as the Division I record for 22 years (1976-98). He gained 100 or more yards 36 times, including 20 consecutive games. He also holds Notre Dame opponent records for rushing yards against the Irish in a career (754) and game (303). Dorsett capped his fabulous career by leading Pitt to a 12-0 record and the 1976 national championship. Taken by the Dallas Cowboys with the second overall pick of the 1977 NFL Draft, Dorsett rushed for more than 1,000 yards in eight of his first nine seasons—the lone exception being the strike-shortened 1982 campaign which, ironically, saw him earn the NFC rushing title. He played in two SuperBowls (helping Dallas to victory in Super Bowl XII) and four Pro Bowls. When he retired from the NFL after 12 seasons (1977-88), he was the league’s second all-time leading rusher with 12,739 yards. Dorsett became the first player to win the Heisman Trophy, acollegiate national championship and a Super Bowl, and receive Hall of Fame enshrinement on both the college and pro levels. Dorsett was elected into both the College Football Hall of Fame and Pro Football Hall of Fame in 1994. Dorsett’s No. 33 Pitt jersey is retired.