We talk a lot on here about recruiting, or perhaps the state of quality recruiting, and what it takes to build a successful college football program. There are obviously a lot of variables that go into creating a strong football team and roster – two different entities with the other two being the coaching staff and the athletic department support.

I’m a firm believer that you build from the ground up meaning that convincing the best HS recruits, wherever they reside, to come and play ball at Pitt is the necessary foundation for long-term success.

Now, we have seen Pat Narduzzi supplement his recruiting with transfers, most notably QB Nate Peterman, to be able to win football games which we did in Narduzzi’s first two years. I’m not a big supporter of multiple transfers because I think that it is a patch job used by a head coach for immediate fixes and so The work of ghould be used judiciously.

Getting incoming transfers is hugely different than actually recruiting high school players and much, much easier.  In the first instance your HC is convincing a established to transfer in with at most just a few other schools pursuing the player.

In the second instance, recruiting players directly out of HS, the staff has to woo and win the player away from many different options offered to him.  It isn’t unusual for a highly thought of 3* or a 4* recruit to have 10 or more serious offers of a scholarship to play ball.  That is a huge difference from getting a transferring kid who has, in the vast majority of cases, failed to produce at his first stop.

So what has Pat Narduzzi done so far in his ability to get HS players to commit to Pitt and how well have they played for him?

There is an old question of is it the “Jimmys and the Joes” or is it the “Xs and the Os” which creates solid producing players in college.  I’ll add a third side to that and state that the coaching staff has a ton to do with it also.  It doesn’t do anyone any good if you land a talented player then have a staff full of position coaches who fail to teach him how to play successful football at the D1 Power 5 level of play.

The HS players who can come directly into D1 ball starting lineups and automatically succeed in a big way are few and far between – but Pitt certainly has had some of those players before. Guys like Dorsett, McCoy, Lewis, Fitzgerald, just to name a few, have done it and in a spectacular fashion.  Notice that when this does happens they are almost always on the offensive side of the ball where someone in a skill position – most notably Wide Receiver or Running Back – can impact the games right away.

Defenders usually take longer to reach that stardom level although that has happened recently with players like Jordan Whitehead at defensive back.

But for me it begins and ends with actual HS recruiting and the ability to get good, hopefully great, seniors to commit to your program and that sometimes takes a full two or three years of hard work and effective lobbying while the kid is still a schoolboy. Because of that I believe the ‘commitment date’ is the key indicator of which HC is responsible for the player coming to play here.

Every so often you’ll see a mass exodus of committed recruits change their minds after a off-season head coaching change (as we saw at Pitt after Dave Wannstedt’s firing) but that was minimal back in 2015’s class.

This begs the question of which of Narduzzi commitments have reached past the normal and average level of play to become ‘stars’ in their own right.  Here is a list of Narduzzi’s ‘own’ recruits; 54 players who committed to play for him and Pitt in his truncated 2015 class and the 2016 & ’17 classes since those are the kids who have had a chance to actually suit up and play ball so far. I excluded the 2018 class. 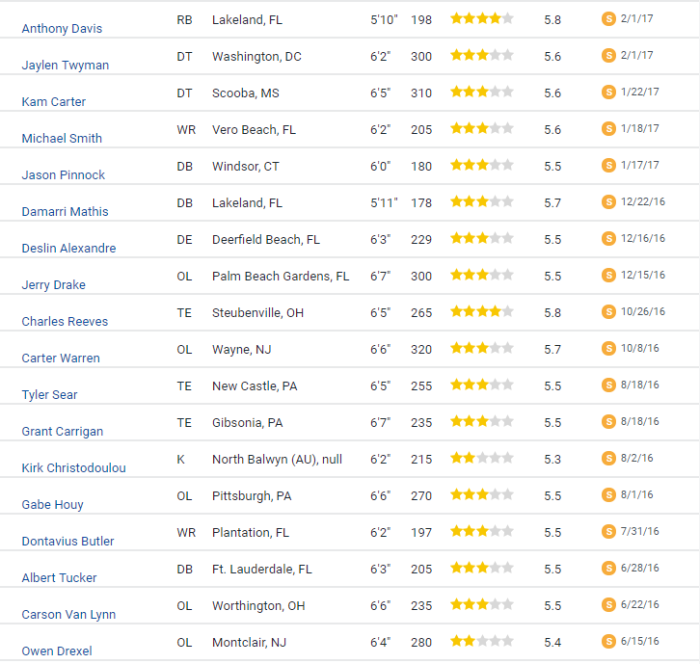 Wow, that is a long list and there are certainly some good ball players on there.  But is it good enough to 1) build a solid roster of kids Narduzzi himself targeted and landed out of HS and 2) win a lot more games than we lose?

Lets see – first off we have this as far as his recruiting stars awarded goes: 8 – 4*, 38 – 3* and 8 – 2* for an average of exactly 3.0.  Not as good as we need it to be because I think if you recruit at the 3 level you’ll play that way. Forget about the silly-ass comparisons to schools like Texas A&M or Wisconsin who also average out at 3*s like we do – their head coaches and staffs, programs and athletic department infrastructures are at a much higher level than we have currently.  They are the outliers in almost every way.

In our last season of 2017 we didn’t have one player who played at a star level. This was  strange as three players who just recently left the team; OT Brian O’Neill, WR Quadree Henderson and DB Jordan Whitehead had done so earlier in their careers but couldn’t sustain it last season.  I can’t remember any recent Pitt team to have three great players regress like that in any single year – which contributed directly to our 5-7 record.

I have also said you need to land more than one or two Blue-Chip (4* and 5) recruits per year to push your team from average to good – or even great. Last years 2017 class had none and this season we signed only one 4 and that is troubling.

Even though he wasn’t a Pitt recruit Narduzzi had QB Nate Peterman come in and really play well which led to our second eight win year. Conner and Boyd helped in the 2015 and 2016 seasons eight win totals also – all bona fide stars who played head and shoulders above others.

The thing about blue chippers though is that you have to keep them on roster for at least three years to get star play from them.  Out of Narduzzi’s eight 4* recruits we still have five on roster which is a pretty good 62.5% keep rate.  For comparison DW landed 27 4* & 5* kids and lost 7 for a  keep rate of 77%.

Unfortunately I don’t see any current roster players who have shown me that they can ascend to star play and be like other Pitt stars before them who could carry the team to victory on their play alone on a consistent basis, and consistent basis is the key here.

Last season we saw big games from QB Max Brown where he threw for over 400 yards and 4 TDs in our win against Rice and then later on we watched RB Darrin Hall take on Duke’s defense and run for 253 yards and three TDs which accounted for almost all our points in that victory.

But aside from those singular games no other players stepped up and played at that level over the course of our 12 regular season games… and that is worrisome to me because looking at the prospective two-deep for 2018 I don’t see anyone who, without a complete surprise big break-out year, will be a true star player for us.

Players like QB Kenny Pickett have the ability but haven’t had more than a combined eight quarters of play to show his stuff. He had a great Miami game of course and we all hope that is the harbinger of what he’ll give us this coming season, but then looking at 66 pass attempts with only one TD is a bit disheartening especially as that TD was on a trick five yard shovel pass to the Fullback Ollison.

Pickett sure could reach stardom but I can’t say the same for any other player with any real certainty.

rsSO DE Rashad Weaver (28 tackles, six TFLs, three sacks and three pass breakups on the year) may up his already effective play to stardom and we really need that to happen as I’m suspect of  defensive line this season.  Maybe rsSO Paris Ford can match the hype shown for him but he hasn’t played a down yet for us.

Another point about our last three true “star” players; O’Neill, Whitehead and Henderson, is that none committed to Pat Narduzzi himself. They all three had been convinced to come to Pitt by his predecessor and committed before the coaching change. Now that said, I understand that all three had to be taught how to play at this level and had to be put in the position to succeed by this HC and his staff (like the move of O’Neill to TE in Narduzzi’s first season) so credit of their good play here is absolutely shared by Pat Narduzzi.

He put them in the position to do well and they did.

However I have real concern if his HS recruiting is good enough to get us out of this five win hole we are in and then get us back up, and keep us up, to the eight, nine or 10 win level. I don’t see that happening at this point and the recent spate of transfers into the program, especially along the offensive line, is an indicator that his 2015, ’16 and 17 recruiting classes have left big holes that need filling right now – and that shouldn’t be the case after a three years of recruiting.

The great thing about college ball is that rosters and starting lineups change every fall and sometimes when you least expect it a star is born. Let’s keep our fingers crossed that happens this coming season because as it looks right now we may have some real problems in the proposed two-deep. It will be almost totally populated with Narduzzi recruits so there will be not excuses made as to inherited players not doing well for us.

Michaelangelo Monteleone Michaelangelo holds a degree in Travel Writing from the University of Pittsburgh. He was a former staff writer for InPittsburgh Newsweekly, and currently resides near Atlanta, Georgia. He has been a Pitt fan since 1997 after he witnessed Pitt upset #22 Miami on Thursday night at Pitt Stadium.
Published April 30, 2018May 1, 2018

123 thoughts on “Is Pitt Building a Good & Solid Program?”