I have a list of URLs and websites I look at every morning so I can stay on top of what is being discussed about Pitt football.  With that I read things I agree with, things I don’t and things that I learn anew… and sometimes things that make me sit up straight and scratch my head.

Yesterday I re-read a piece by Chris Dokish that he had published earlier on in March regarding the Pitt Offensive Line and its possibilities.  I like Dokish’s writing, especially when it comes to HS recruiting, but don’t agree with everything he writes.  I find that he is overly optimistic when it comes to Pitt football and, as other writers do, tends not to look back at his own predictions to see whether he was correct or not.

That’s fine – as I said, he’s not the only Pitt beat guy to not look back at himself.  But here is a squib he wrote in March that is truly puzzling… I emphasized what I thought was his crazy talk.

“Last season’s offensive line was mostly above average, even after losing all-conference players Adam Bisnowaty and Dorian Johnson the year before. And now with early NFL entrant Brian O’Neill, and long time veteran Alex Officer, moving on, every lineman from the very good offensive line of two years ago is now gone, except 6’6″ 315 pound redshirt senior Alex Bookser, who will return to start at guard.”

I guess we watched two different offenses out there.  Here are the three-year comparisons of key offensive indicators for Pitt since Narduzzi took over: 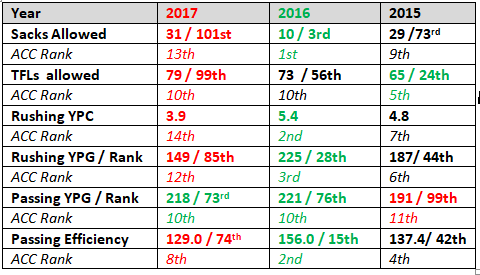 There is a clear indication that not only wasn’t our OL above average but it wasn’t even close to average nationally. We averaged out at 85th nationally in the offensive rankings…out of 129 teams which put us at 33% – or in the lower third of the nation.  The two main OL indicators of Sacks Allowed and TFLs Allowed we averaged 100th or 22%…

In essence it sucked and I’m not sure how anyone can not see that.

OK – that an example of looking back with strongly shaded blue & gold shaded glasses.  Here is a case of a local sportswriter looking forward with the same shades on…maybe.  I say maybe because the future hasn’t happened yet.

Rival’s Chris Peak is pretty high on the 2018 version of the team and that’s great for him.  He’s a pretty optimistic guy all around.  But in his latest podcast he said a few things that again made me sit up straight.

First was that he feels our ’18 DEs Weaver and Hendrix will be the ‘best’ DR tandem we have had since Romeus and Sheard (at the  22m 10s  mark of the podcast).  Allllrighty then!!  But for my money any tandem that had Ejuan Price in it – no matter who was opposite him – has a much better chance to be better the any DE tandem with Hendrix in it.  That is a minor thought of Peak’s though…

He ramps it up at the 30+ minute mark he talks about what he believes how good this defense can be as relating to the 11 other ACC defenses.  I could understand when he waxes on about the defense being better this season that last as I think it will be also.  But where I see some major holes that need to be filled – especially on the interior of the DL and that we need much better play from the defensive backfield where we gave up 254 yards per game; 24 TDs and grabbed only nine INTs.

Throw in the DE position with  Hendrix into that mix for me also – he hasn’t impressed me one bit since he got here.  A starting DE who was 11th on the defensive in total tackles with only 5 TFLs and 3 sacks on the whole season – he started in and played all 12 games – is damn poor.

But Peak is thinking that our whole defense will definitely be in the Top 3rd of the ACC and maybe even one of the Top Three ACC defenses this coming season.  That is a very tall order – here is what we were in the ACC last season even with the late games’ D surge:

We’ll be better on defense in ’18 guys but I’m not betting mortgage money that we are going to be like night and day from ’17’s defense this coming season.  Last year at this time I read much of the same things from other writers and Pitt fans and truth be told our defense wasn’t all that much of a hugh positive leap from 2016 as some thought it would be.

I get the feeling that because of what we did on defense in the VT and Miami games late last November fans feel we are automatically going to pick up exactly where we left off with that – and that isn’t the case always. Rarely does it happen exactly that way actually.

We’ll see what we have after the first three or so games next season – Albany will score against us just as YSU did to the tune of 28 second half points racked up, but Penn State and then Georgia Tech will be our true tests.  If our defense can win those games for us – as I fear they will have to in the majority of our games – then I’ll feel pretty good about their progression.

For now though I like what is happening with the D so far but I’m a long way from saying it will be all that much better than what we saw last season – and certainly I’m not projecting them it be in the top three or four in the ACC at this point.  Let’s say we’ll average out to the middle of the 14 team ACC pack in defensive categories this season – if so that’s a nice progression all by itself.

Michaelangelo Monteleone Michaelangelo holds a degree in Travel Writing from the University of Pittsburgh. He was a former staff writer for InPittsburgh Newsweekly, and currently resides near Atlanta, Georgia. He has been a Pitt fan since 1997 after he witnessed Pitt upset #22 Miami on Thursday night at Pitt Stadium.
Published April 19, 2018April 19, 2018

92 thoughts on “Perceptions Are Funny Things…”