Here is a nice submittal by our longtime reader and commenter WBB on the prospective 2018 season Linebackers we’ll see out on the field.

Here are Linebackers‘ 2017 the two-deep listings  for the starting game against YSU (left) and against Miami in the last game (right) : 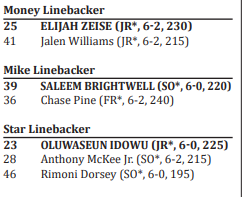 I suspect that Brian Popp’s numbers above reflect his work on special teams.  Popp is no longer listed on the roster shown in the university’s website.

I do not think there is any doubt that the LB position has more depth, speed and athleticism than the past few years.   All starters and back-ups return as well as rsSR Quentin Wirginis who had 28 tackles and four sacks in 2016 as a back up to Matt Galambos.  rsSR Sean Idowu led the team in tackles the past two years and I thought rsSR Elijah Zeise really played well the last half of the season after being pretty much a no-show in the first half.

Due to Wirginis’ suspension and subsequent injury, rsJR Saleem Brightwell had to switch to MLB and his inexperience is pretty much reflected in the stats shown above.  As we know, he is fast and athletic but really struggled in learning the position especially in the first half of the season.  I believe Reed has some doubt that Wirginis is returning but I think Narduzzi would have made an announcement by now if this was true.

Editor’s Note: Pat Narduzzi has publicly said that Wirginis will be back and – surprisingly to this fan – that Wirginis would be the starting middle linebacker in 2018.

I would not doubt that if Wirginis has a good spring, Brightwell will be back at the Star LB position where he started a couple of  games as a freshman.  I also see more playing time for rsSO Chase Pine and rsSO Elias Reynolds as back-ups.  rsJR Anthony McKee was a highly thought of recruit back in 2015.  I remember that he was the last at-home visit Chryst had as a Pitt coach and McKee also visited Wisconsin the last weekend before LOI day.  Hopefully, the light goes on for him this year.

Redshirt freshmen Albert Tucker, Kyle Nunn and Cam Bright may be considerations of breaking into the two-deep this year.   I remember being wowed by Bright’s highlight reel but, of course, any speculation on any of them is merely a stab in the dark.

There is real reason for hope in the linebacker position this year due to depth and experience.

Michaelangelo Monteleone Michaelangelo holds a degree in Travel Writing from the University of Pittsburgh. He was a former staff writer for InPittsburgh Newsweekly, and currently resides near Atlanta, Georgia. He has been a Pitt fan since 1997 after he witnessed Pitt upset #22 Miami on Thursday night at Pitt Stadium.
Published March 3, 2018