Narduzzi Gets a Birdie on Last Hole

This decent 2018 recruiting class ended on a nice up note with the verbal commitment and signing of 4* ATH/Running Back Mychale Salahuddin.  We needed that to happen for a few reasons – first because we need a good, possible, star RB on our roster.  He tried faking Pitt out though – from the Post Gazette.

But perhaps more importantly grabbing a last-minute 4* recruit kept this class from becoming the first recruiting class in 15 years to not have any 4* or 5* recruits in it.  That may sound minor to you but it really isn’t.  In recruiting perception is everything – and the best recruits want to play next to the other best recruits.

So we end up with 20 new Panthers and with a 36th ranked class. As much as I try I can’t get very excited about this. We got some nice recruits – the aforementioned Salahuddin above is the gem. We’ll have some solid future starters out of it I’m sure.  We’ll even have a kid or two who will get post-season honors.  That happens every year at Pitt.

But the bald truth is that successful Pitt football teams run on stardom power, not on the backs of 3* recruits. Look back over the last 15 years and see what the better seasons had in common.  In those early years we had Big Name stars carrying the teams. To name a few past years

In 2003 we had Rutherford throwing for 3700 yards and 37 TDs to get eight wins and All-American Larry Fitzgerald being the star receiver he was;

2008 we won nine  games when LeSean McCoy ran for 1488 yards and 21 TDs.  You catch the drift here; the better the star power the better we play as a team and win more games.

Revis, Baldwin, Byham, Dickerson, Otah, McCoy, Lewis, Graham, Donald, Johnson, Conner, Boyd, Peterman – these are just a few of the genuine star players we had when we put up eight or more win seasons.  The majority of those were 4* or 5* recruits.

Sorry but when I look at this recruiting class and then back at last year’s 2017 class no one player jumps out at me as being able to produce like those Panthers above have done.  Maybe we’ll have one – Dion Lewis was a 2* recruit and other 3* recruits have risen to the top of play also.  But if you want the true stardom players out on the field working for you then you need to recruit the blue-chip kids.

Pitt isn’t the type of team or program that some other 3-star recruiting schools are – like Wisconsin for example. Pitt fans love to point to Wisconsin as a role model for us to become… a team that can win with almost all 3* recruits. C’Mon folks! Do we ever really think we’ll have that strong and consistently well-administered and funded program like they do?

Pitt need to catch lightning in a bottle for the successful seasons.  Just lately we had two eight win seasons under Narduzzi – but we also had 3* James Conner, 5* Dorian Johnson, 4* Tyler Boyd, 4* Alex Bookser, 4* Jordan Whitehead and 4* Nate Peterman carrying us to those wins.  Stars matter and… recruiting stars matter also.

Joe L. has updated his 3* Recruit Teams comparisons with yesterday’s final signees and it is pretty interesting.  If you remember we posted his original version of this on the 19th of last month.   I suggest re-reading that article to get a clear picture of where are from then until now the day after the final signings.  Here is what he wrote for today:

Now that LOI Day has come and gone, I thought it might be interesting to re-post part of a table used in the post “Is Everything OK on the Football Front?” from January 19th. Now that the 2018 class is largely complete, I wondered if there were any nuggets of insight to cull from the information. 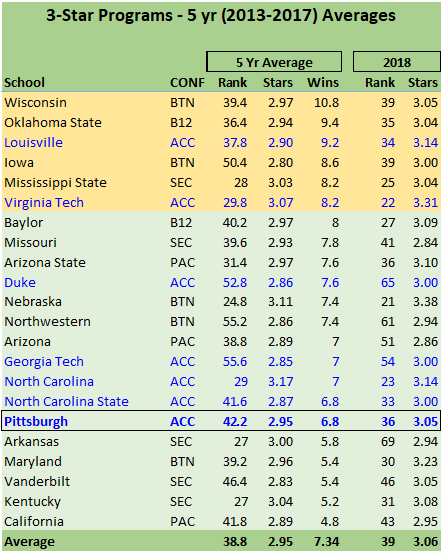 One thing that I noticed was that Pitt edged up from 3.0 stars to 3.05. Perhaps its minor – oh, heck it is minor – but this year’s class is a bit better than our 2013-2017 average of 2.95. And why miss an opportunity in this, our basketball season of discontent, to find something positive to hold onto on the football front.

Any improvement is good improvement and I hope we “ain’t seen nothing yet” – with apologies to Bachman-Turner Overdrive.

But more importantly – at least from my perspective – is how we stack up against the group of teams that are 3 star programs averaging 8 wins or more per year as well as the ACC teams in this group. We are right in the middle of the pack. Virginia Tech and UNC had above average classes in 2018, so if we intend to contend in the end, we are going to need to improve more than we did this year.

I think some guy named Reed has already said that and the numbers bear that out in 2018.

Hear Hear…- “so if we intend to contend in the end, we are going to need to improve more than we did this year.

Erick Hallett, DB, 5-11, 175, Cypress, TX/Cy-Fair
One of the Houston area’s top prospects who helped lead Cy-Fair to the Texas Class 6A Division II championship with a 15-0 record…totaled 38 tackles, six interceptions and eight passes defended as a senior…returned an interception (34 yards) and a fumble (19 yards) for touchdowns…also contributed as a return specialist, averaging 27.6 yards on kickoffs (five for 138) and 11.2 on punts (21 for 235)…compiled 10 total INTs over his junior and senior seasons…Houston Chronicle All-Greater Houston…two-time first team All-District 17-6A…played under Coach Ed Pustejovsky.

Stefano Millin, OL, 6-5, 305, Massillon, OH/Perry H.S./Kent State
Will join Pitt as a graduate transfer after starting on the offensive line the past two seasons at Kent State…played in 35 career games, making 30 starts for the Golden Flashes…made 27 consecutive starts dating back to the 2015 season…started all 12 contests at left tackle in 2017…also started all 12 games in 2016, making eight starts at center and four at right tackle…in 2015, his first active collegiate season, played in 11 games with six starts (four at center and two at left tackle)…was a standout two-way lineman at Perry High School under Coach Keith Wakefield…finished his prep career with 18 sacks and 25 tackles for loss…also an exceptional wrestler at Perry, twice qualifying for the state tournament.

Kaymar Mimes (mymes), DL, 6-5, 235, Long Branch, NJ/Long Branch
One of New Jersey’s top defensive end prospects…compiled 87 tackles, 10 sacks, four forced fumbles and two fumble recoveries as a senior…led Long Branch to a 9-3 record and the New Jersey State Interscholastic Athletic Association (NJSIAA) Central Group IV championship…played under Coach Dan George…All-Shore…All-Class B North…a well-rounded athlete who also played basketball and was a versatile track and field standout, participating in the discus, shot put, high jump and on the 400-meter relay team…rated the No. 26 overall prospect in New Jersey by 247Sports, No. 28 by ESPN and No. 33 by Rivals…is the brother of Oakland Raiders linebacker Shilique Calhoun, who Pat Narduzzi coached while they were both at Michigan State…Calhoun played at Michigan State from 2011-15, earning Big Ten Defensive Lineman of the Year honors.

Mychale Salahuddin (michael sa-la-who-deen), RB, 5-11, 190, Washington, D.C./H.D. Woodson
Earned praise as one of the nation’s top all-purpose backs and was widely considered the top overall prospect in Washington D.C….rushed for 1,274 yards and 12 touchdowns as a senior at H.D. Woodson…averaged better than 10 yards per carry…Washington Post first team All-Met…first team All-D.C. Interscholastic Athletic Association (DCIAA)…first team All-DMV (D.C., Maryland, Virginia)…led H.D. Woodson to a 9-3 record and the DCIAA championship game as a senior…rated Washington D.C.’s No. 1 prospect by Rivals and 247Sports…rated the country’s No. 5 all-purpose back by Rivals and 247Sports…rated the No. 9 prospect in Washington D.C. and the nation’s No. 33 running back by ESPN…played under Coach Greg Fuller. 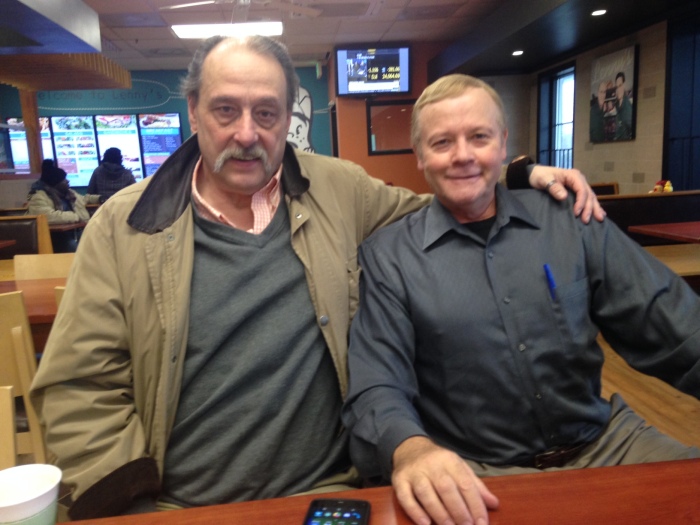 Michaelangelo Monteleone Michaelangelo holds a degree in Travel Writing from the University of Pittsburgh. He was a former staff writer for InPittsburgh Newsweekly, and currently resides near Atlanta, Georgia. He has been a Pitt fan since 1997 after he witnessed Pitt upset #22 Miami on Thursday night at Pitt Stadium.
Published February 8, 2018February 9, 2018

117 thoughts on “Narduzzi Gets a Birdie on Last Hole”