Well, the time has rolled around again for the Pitt football staff to put their best feet forward and host their annual National Letter of Intent (LOI) Signing Day event this year on Feb 7th, 2018.

Even though some of the signing drama that existed on past LOI Days doesn’t exist much now that we have an early signing period in December – it is still great fun to watch Narduzzi and the position coaches talk about the individual recruits and what they expect from the kids while they are at Pitt.  Hopefully they will spring some last-minute Blue-Chip surprises on us!

For instance the 2013 LOI Day event was when the staff said they were going to play Conner at running back and not at Defensive End as he was being recruited by other teams to play.  BTW – he was only offered by Pitt, Ohio, Bowling Green, Toledo, YSU and Eastern Michigan!

I like these events as it is an afternoon and evening of meeting other Pitt fans and talking about Pitt football smack in the middle of the off-season doldrums.

So and again,  The Pitt recruiting class of 2018’s Pitt National Letter Of Intent Day (NLOI) that will held be at Heinz Field with free parking in the Gold Lot. (You can RSVP through the link below).

I will be hosting a cocktail hour before the official start of the event.  Meet me and other POV’ers at Jerome Bettis’ Grille 36  between 3:30 – 5:00 pm. Possibly earlier depending how long my drive up from Maryland takes.

At around 5 o’clock we’ll mosey over to the North Club at Heinz Field to do the football coaching staff ‘meet and greet’ that Pitt puts on before the more formal 6:00 p

m talks and PowerPoint shows by the position coaches talking about the kids from the 2018 recruiting class they will have under their care.  That lasts about an hour or so then if we feel like it we can have another few back at Bettis’ Grille.

I’ll actually be staying overnight at the Residence Inn right there at Heinz so if anyone wants to keep painting the town blue and gold afterward I’m up for that also.

Plus, we may meet up with Inoke Breckterfield again – we are old friends and go way back to the Islands… 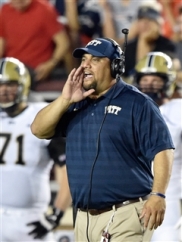 Michaelangelo Monteleone Michaelangelo holds a degree in Travel Writing from the University of Pittsburgh. He was a former staff writer for InPittsburgh Newsweekly, and currently resides near Atlanta, Georgia. He has been a Pitt fan since 1997 after he witnessed Pitt upset #22 Miami on Thursday night at Pitt Stadium.
Published February 3, 2018February 7, 2018