Well, Pitt has spun the bottle and instead of getting kissed by the gods of college football we got a rather firm handshake.  Our new Defensive Coordinator, ex-Northwestern LB coach Randy Bates, has decided to jump up a rung of the coaching ladder and I suppose that is a good thing for Pitt.

My first reaction was… who? But then I started to feel better mainly because it means that Josh Conklin really is gone.

I just wish he didn’t look like Vladimir Putin so much – it unnerves me, especially since he probably held a Secret Classification while in the Naval Reserves.

His bio reads in part: Randy Bates has led the Northwestern linebackers for 11 seasons and has spent 36 years overall in the coaching profession. Bates assumed his current role at NU after Pat Fitzgerald was named the Wildcats’ head coach in July, 2006.

Here is the full press release by Pitt last night on this hire.

OK – so he’s not a young up and comer like some wanted… matter of fact he has exactly one year of DC experience with the Louisiana Tech Bulldogs way back in 2005 and the story the stats tell of that work is… well… blah.  Here are those ’05 LSU stats: 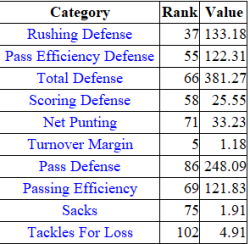 I think Narduzzi likes defensive coaches who do well with the turnover margin because, much like Conklin before him, that’s the thing he did best as a previous DC.

Keep in mind those numbers to the left are from 2005 and 13 years is a long time in college ball.  Lately he has been the linebackers coach for the team that beat us in Narduzzi’s second bowl loss back in 2016 (had to get that in, right?) the Big Ten powerhouse Northwestern University’s Wildcats.

His work there has been good overall. Because I love stats and really – they are facts – let’s look at the NW defenses  over the last few years and I think you’ll see that overall it is rather impressive.  One point to consider though;  Bates’ work was only with the LBs and as we know almost all defensive stats are results of a combination of the whole defense playing as one.

That said two stats jump out at me as being particular to defensive units – Rushing Defense is one that is heavily weighted  by the LBs, then the various Passing stats by the DBs.

So – here it is for the last three years. I highlighted in green what I see as a real positive.

What is great here (and so much different from what we have seen in Pitt’s defensive ledger book over the last three years) is that 1) there is improvement from ’16 to ’17 in seven of 10 categories and 2) that their Red Zone defense has been so very good.

Hell, just averaging 19th in rushing Defense over the last three years is damned impressive and you know LBs have a lot to do with that.

What about NW’s defense compared to Pitt’s last year?  Again, remember these two teams played in different conferences and had different opponents but the results are striking. Green highlights are where NW bettered Pitt. 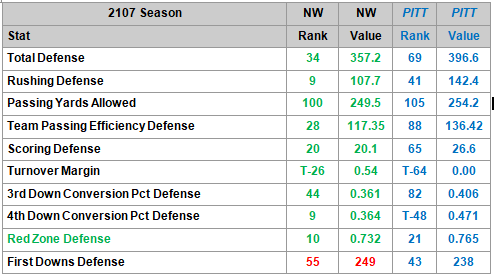 Again – all this info comes with the caveat that Bates was not the Wildcat’s Defensive Coordinator but a staff position coach of LBs.  In a real way that limits how he affected  these overall results, but his work can certainly be attributed to have influenced those good defenses.

Reading this makes me feel … well a small bit relieved I suppose yet I’m not finding any real joy in this hire. It feels so damn Pittish to me. Instead of targeting a proven defensive coordinator from another FBS school we, again as Pitt always seems to do, settled for someone we can fit into an established budget instead of opening up the purse to attract a valuable known coordinator.

But we know Pitt does things on the cheap, don’t we? That shouldn’t surprise anyone who has followed the Panthers for any length of time.

Look, when a man who has been on the same staff for 12 years, in the same coaching position no less and is in his late 50s, that guy hasn’t been fending off great job offers my friends. This move is a step up for sure but it does make you wonder why no one was offering him substantial pay raises earlier in his career to be a DC on their staff.

Remember a comment I made a while ago saying that when a coach opens his mouth you better have a good supply of salt grains next to you to listen to it? That still applies – here is his first quote as a Panther coach (emphasis mine):

“I knew it would always take a special place and outstanding opportunity to draw me away from Northwestern,” Bates said. “After talking with Pat Narduzzi, I knew Pitt was that type of place. It is a tremendous honor to join a program with such a rich tradition and history. But more importantly, it has an even brighter future under Coach Narduzzi. I can’t wait to meet our players and get started.”

My gosh – this makes it appear that Pitt is a great destination job and he was just waiting until he saw area code 412 on his phone to pick up and answer it. Well, that’s less to do with his being here than his looking at retirement in a few years and saying “Hey, I better get a pay raise ASAP because my Social Security checks just ain’t going to cut it.”

Narduzzi’s first public statement about Coach Bates held this thought: “But what is most impressive about Randy is the type of person he is. He values relationships and is really invested in the student-athletes under his watch.”

That may also be coachspeak but one thing we do know about Narduzzi is that he takes off-field issues very seriously.  We have seen that by his disciplinary actions and his discussions about his own role in the lives of the student athletes under his charge.

So I believe that quote and I also understand that a man doesn’t hold a Naval Officer’s Commission from the President of the United States until they retire from Service without understanding what real leadership is and its applications. For me that is a true plus with Randy Bates.

But overall?  I’m OK with LT Bates as our DC.  I just think we’ll probably have the same average-at-best defenses we have already had under Narduzzi because I don’t feel Narduzzi is all that great a head coach to first identify a highly talented DC and then give that coordinator free rein to build and lead a defense which will be adequate to carry us to championship seasons.  That second part is the key for me.

I do not think Narduzzi’s ego will allow that independence to happen no matter who is sitting at his right hand in the lunchroom. No, he wants a Mini-Me sitting there instead.

One thing I absolutely don’t concern myself with is how good or bad a recruiter the new hire is purported to be.  There as so many variables that go into convincing a recruit to choose your school that the individual unit coordinator is a small part of that – they aren’t the ones out there doing the leg work for the most part anyway – unless they are pushing hard for a nationally desired blue-chipper anyway.

Put it this way… is there any staff coach on Pitt’s roster that you feel would be a real blow to our recruiting if they were to take a job elsewhere? I don’t see any.  Recruiting is all about the Head Coach, the overall program and the University itself.  Yes, I know what some NW fans are saying – I dismiss that just as I don’t feel that any singular Pitt staff coach makes big and noticeable difference in recruiting either.

You may hear a recruit say he had a “…great relationship with DBs Coach Smith…” and that helped his decision but recruits, and more importantly their parents, know that coaching staffs always have turnover and that it isn’t a good idea to pin your recruitment on a staff coach’s being there while you’re there also

So if he can recruit well that is a plus – but 95% of any DC’s true worth to Pitt is what happens with his defenses between the white lines on game day.  I firmly and 100% believe that.

We’ll see how that game day aspect of his hire plays out; seeing a halftime adjustment that actually works will be a great start in that.

I’m also interested to see what this guy will be able to do with what I consider the three pretty average recruiting classes which will have preceded him. He’ll be working mostly with Narduzzi’s recruits this coming season (about 8 of 11 defensive starters I think) so he’ll either get them to play above their perceived talent level- way above hopefully – or not.

He has a tough situation right off the bat because our offense is not going to be scoring a lot of points out there next season. He’ll have to force his defense to actually win low scoring games for us – something we haven’t been able to do well in three years.  Last year we averaged 19 ppg in our seven losses while we giving up 34 ppg on average – that sort of defense won’t win many games next year either and has to change.

But I already felt we’d have a bit better defense in ’18 than we did last season and after looking at this hire my feel good prediction needle hasn’t really jumped all that much but it has moved some and to the positive side.

So! Welcome aboard LT Bates, stow your seabag in your Southside locker and remember… there is a blog writer out there who will always outrank you!

NOTE:  You can’t beat the advertisement I just saw above Bates’ profile on the NW Football Bio site:

Just when we were starting to get out of the FBS’s Defensive basement we have to see that! Made me laugh.

Michaelangelo Monteleone Michaelangelo holds a degree in Travel Writing from the University of Pittsburgh. He was a former staff writer for InPittsburgh Newsweekly, and currently resides near Atlanta, Georgia. He has been a Pitt fan since 1997 after he witnessed Pitt upset #22 Miami on Thursday night at Pitt Stadium.
Published January 14, 2018January 15, 2018