Let’s revisit this defensive backfield issue now that the spring practices have been underway for a while.  I think I can speak for the majority of Pitt fans who say they want to see new and more talented blood in as starters and in the two deep.

My problem is I don’t think we’ll see that much if  at all… unless it is strictly in the two-deep.  Here are the returning in the defensive backfield with one newcomer, Maurice Ffrench, who is maybe, possibly switching over for depth.

You can see that out of the 13 players I listed (I dropped kids I think have no chance at serious PT) we have a combined total of 23 starts among them.  23 folks; among 13 returnees.  All those other “Games Played” were either in the DB rotation or special teams but mostly on special teams coverage units.

When researching this subject I started perusing the camp reports in detail and other media sites and guess which names popped up the most when the staff was discussing which DBs are playing the best so far?

Maddox, Motley and Briggs.  That’s who. I’ve heard Narduzzi twice talk about how well Briggs has been doing.  This staff is one that values not only seniority but actual game experience.  Remember that last season we fielded only one new guy in Whitehead – and even he had a year’s experience behind him.  Other than he they  were SR R. Lewis, SR T. Webb, and rsJR A. Maddox.

Don’t be surprised if we see that replicated in the beginning of this season with JR Whitehead, rsSR Maddox, rsJR Motley and rsJR Briggs in some sort of combination.  Every college ball fan wants that one freshman to walk in and become a starter right away and this year we Pitt people are keeping our fingers crossed that DB Paris Ford will do that.

We really need him to… boy do we.  We do have other kids who may jump up and snatch a starter’s job also. Last season people pinned their hopes on 4* DB Damar Hamlin (who had recruitment offers from every big school)  but injuries derailed that attempt as it may happen again with him this season.

You can play a top-shelf talent like Whitehead because he’s that special and has the football intelligence to do that.  But regular DBs need time with a college coaching staff before they are ready for the most part.

The reason I listed the new kid’s heights is because our returning prospective starters average 5’10” with only Whitehead being close to 6′ at  5’11”.  We watched our opponent’s receivers high-point catches against us many, many times last season.  I finally had to spray Clorox in my eyes during the Clemson game to ensure I couldn’t see our futile DBs giving up yards any longer.

For that fact alone 6’3″ Henry Miller may get the spot in the two-deep that he wants.  But again, does height or speed make up for experience when it comes to fielding a decent and effective backfield?

On the flip side the experience that the returning DBs have has been on pretty crappy defensive backfields to say the least.  Especially last season’s amazingly poor showing.  Experience in watching WRs blow past you for TDs isn’t the greatest thing on a DB’s resume’ but there it was.

Now this is only mid-spring ball and we have the rest of it and a whole four week fall camp to go through before Narduzzi and Conklin come out with an ‘official’ two-deep for the Youngstown State game on Sept. 2nd.  That is a long time away, a lot can happen and especially injuries may occur.

But again, this staff sticks with experience when they can – but not all the time as we saw last season with RBs Chawntez Moss and Darrin Hall getting the bulk of the carries behind Conner instead of Quadree Ollison – but the certainly has done it at the QB position for two straight starters there with JR Peterman taking over for rsJR Voytik  (kind of I guess) and now Brown jumping over the rest of the younger QBs on the roster .

The question then is do you stick with players you know intimately and you trust or do you blow up the backfield and let the chips fall where they may?  It is an interesting predicament to have as a coaching staff and one I’m sure they wish would just go away.

But we don’t have much of a grace period for the staff to make adjustments and tinker with player combinations.

As you can see on the right we have a semi-easy opener against YSU whose QB, Hunter Wells, came on in relief and led the Penguins to a 7-2 record.  He’s a pretty good passer and will be starting against us this season.  That will be a smaller litmus test to see how well we are playing the pass.

But the next two games are where the staff will show what the can do as far as major corrections needed from one year to the next.

Against Penn State, at Penn State, we’ll see QB Trace McSorley again.  If you remember he carved us up for 332 yards and one TD on 24 of 35 passing for a 151.77 rating last year.  We won that game on the shoulders of our offense – certainly our pass defense sucked regardless of that nice INT at game’s end.

The next week we’ll face OSU’s Mason Rudolph again, at home this time but don’t expect that to make much difference. If McSorley carved us up in ’16, then Rudolph chewed us up and spit us out. His 26 of 46 passing for 540 yards and 2 TD (a 167.48 rating) was a total embarrassment seen on national TV and is what started Pitt fans truly worrying about the fact that we couldn’t stop a kindergarten passing offense if we needed to.

Gee – it will be so much fun playing those two teams again, won’t it?  Whatever moves have to be made need to be made in early in fall camp in my opinion.  If we are going with new players back there then make them starters for the last two weeks of fall practice and get them solid playing time in those August scrimmages. That along with the YSU game to get their feet under them will get them ready for the Big Top.

We’ll find out this year if the true problem is the players not being up to snuff or if it is poor coaching from the DC and DB coach Renaldo Hill.  I’ve always felt it was on the staff.

This year, with all the fanfare of Narduzzi’s recruits exiting their redshirt years and being able to play without penalty, has to show major improvements right off the bat. We can’t afford to start the season off with a 1-2 record because of our pass defense even though I think that’s whats to happen.

Notes:  We’ll do the POV Roundtable Call-in tomorrow night instead of this evening as I’m tied up with the Library of Congress Veteran’s History interview tonight.  I’ll post something when the interview becomes available to the public.

Remember that Human Book thing I did and that I mentioned how diverse the group of “books” were?  Well, here is a photo of the people who volunteered to be the books.

This is one of me screaming at an older woman… I can’t remember why… maybe she was a Penn State grad. 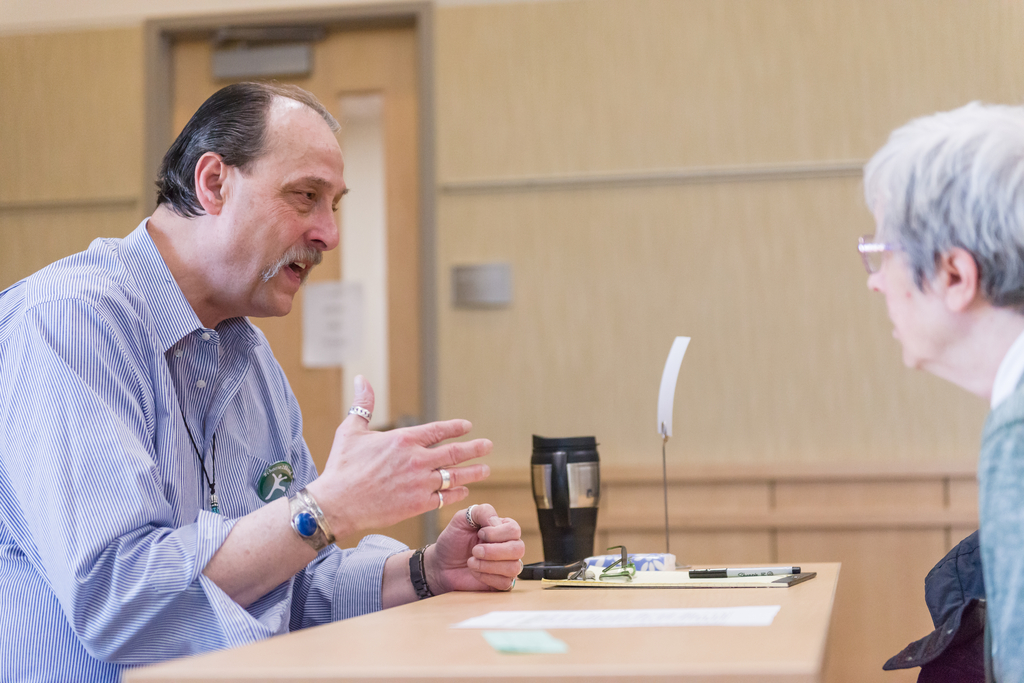 Apparently the golfing is a scramble format and we’ll take walk-ins that day. Guys – drive down and hang out with us even if you don’t golf.

I have a question to the attendees:  I’m making up attendee goody-packages and will make name tags also – would anyone mind if I listed both their real first name along with their POV screen name on them?

74 thoughts on “Who Are Our New DBs This Season?”