First off I’m definitely going to the Pinstripe bowl game at the new Yankee stadium.

New York City around the Christmas and New Year holidays is a truly great place to visit and kick out any holiday stress… just to replace it with Pitt football stress I suppose but you can’t have everything.

Combine all that with the fact that we are facing a Big Ten Northwestern team that is 6-6 on the regular season and is only a middling passing team and that’s icing on the cake.  We may actually be able to win this bowl game – something we haven’t been all that good at of late.

We are 1-4 in our last five bowl games, the singular 30-27 win being against Bowling Green in the world-renown Little Caesar’s Bowl.  To counter that depressing fact a bit we also have been in bowl games the last eight years running which for Pitt, and other teams also, is an accomplishment.  In those games we combined three wins vs five losses and that leaves one wondering just what will happen in three weeks.

Pat Narduzzi has done a very good job putting ‘done‘ check marks in the boxes of listed items I think he needed to accomplish this year. Beating newly regenerated rival Penn State was the first task, then besting a very strong conference foe (my main requirement for him this season) in #2 Clemson was the other.

Winning a bowl game is the third step as along with that it will bring us to a 9th win in only the fourth time in the past forever.  I believe most Pitt fans thought we’d beat Navy in the Military Bowl last season for that elusive 9th win.  I didn’t though because I had twice watched Navy play at home down here in Memorial Stadium already and knew they were a top-notch, fast and solidly talented team.

So that loss wasn’t a big surprise for me – but the way we were so utterly unprepared for Navy’s ground attack was. Still, watching that loss was way preferable to sitting through the “I’ll take that sharp stick now please, I have no need for eyes any longer”  3-0 loss to Oregon State in the 2008 Sun Bowl  under Wannstedt’s fine tactical decision-making. We were going for a first time in 26 year 10th win then.

I wonder if DW truly believed that QB Bill Stull was going to accomplish anything later in that game after Stull’s poor 1st half throwing a 5 for 14 completion rate.

Stull finished out the 2nd half going 2 for 10… thus totaling 7 for 24 and 52 yards at a stunning 2.2 yards per attempt passing on the game.  This with Pat Bostick sitting on the bench until the very last series where he promptly hit Dickerson for two completions for 36 yards right before the clock ran out.

WTH!!  Oh, that’s right – God made the winds die down for Bostick.

Anyway, that won’t be a big problem for our Panthers in New York though.  I’ll do a thorough “Know The Enemy” article prior to the game as usual but here are some things to think about in considering the quality level of the ‘Amethyst Wildcats’.

Why is it all college football highlights are accompanied by rap songs?  I’d like to hear something like this once in a while… the opening lyrics are a perfect fit for Josh Conklin; he may have to turn that red light on after the dust settles on the season.

Here’s a quick look at Northwestern’s production on the season:

As you can see their strengths lie in their defensive play and in creating turnovers.  Keeping their opponents to 22.1 ppg is no joke, especially compared to our 109th ranked 35.6 ppg defense (it hurts just to type that).

Their keeping their foes to a 35% 3rd down conversion rate is very good and if our passing game isn’t on the mark that could be worrisome in keeping drives alive.  Especially if James Conner hires an agent between now and Dec 28th.

Throwing for 247 yards per game is not too bad either but one must consider the “Suck Factor” has to be applied to any opponent’s passing game when predicting what might happen against Pitt’s passing defense. That is the multiplication of a factor of at least 1.75 across the board to whatever passing averages they have going into the match with Pitt.

This means we should anticipate Northwestern will throw for at least 432 yards with a yards per attempt rate of 11.6 and 3 TDs.  That quite possible could be on the low side considering that over the last three games of the season we gave up an average of 423 yards and that is with poor passing Duke as one of those three.

The good news is that we won those three games anyway so us giving up passing yardage measured in tenths of a mile doesn’t automatically mean a loss.

Again – closer to game week I’ll get into the regular pre-game article format and until then we will get back into the swing of regular articles now that we have 22 days to kill before the bowl game.

I’ll address some of your great topic suggestions and keep on with the ‘look-back’ profiles of the players that helped the team to eight wins…so far.  I do think we’ll see the ninth as a belated Christmas present.

Also folks – think about where we POV’ers can meet up for the pre-game festivities.  I’ll be going up on the 27th so if anyone else is traveling up early we can get together and have a nice evening of drinking and insulting each other.

Note: I truly love NYC as my family and I were stationed there on Governors Island from 1993 to 1996.  Governors Island is (was) a 172 acre Coast Guard base (a prior Army base) that was like living on a small New England college campus. It is located just off the southern tip of Manhattan. We didn’t pay rent or lock our doors and it had everything a small town would have including a nine-hole golf course.

The Coast Guard departed the base right after we did, too expensive to maintain the national historical status of the buildings for one reason, and the Feds turned the island into a National Park.  That link is to the history of the island.

If you have the time do try to get out there and visit – I believe the ferry trip is free and the architecture on the base is outstanding – like walking back 150 years ago.It is a well designed arts, cultural and sports park now.

We would still be living there if we could have pulled it off – you have the whole town of New York at your disposal then get to go back to a sleepy, quite and completely safe base at the end of the evening.

Here is some of the Officer’s housing where we lived…

and you can see below that the Island’s golf course went right around the old fort. 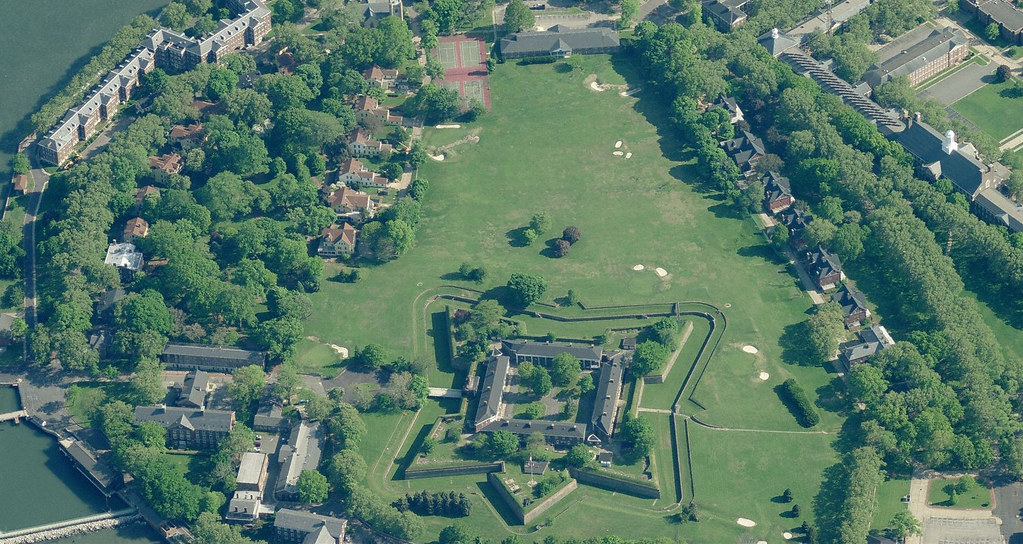